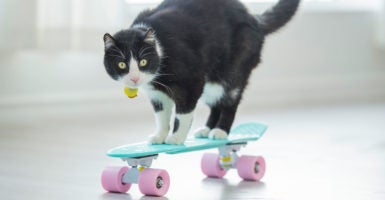 Assistant professor Susan Nordstrom of the University of Memphis wrote an article about her cats to develop a "multispecies narrative," listing the cats as co-authors. (Photo: FatCamera/Getty Images)

American colleges and universities are struggling with a perception problem. Between rowdy protests, skyrocketing costs, and some ridiculous course material, students are starting to wonder if it’s all worth the money.

Although some colleges and professors are dedicated to serious scholarship, a recent paper published by Qualitative Inquiry raises significant questions about the nature of academic inquiry in higher education.

Susan Nordstrom, assistant professor of educational research specializing in qualitative research methodology at the University of Memphis, recently published a paper titled “Guilty of Loving You: A Multispecies Narrative.” Susan Nordstrom is not the only author on this paper. The listed co-authors are Amelie Nordstrom and Coonan Nordstrom—her cats.

After the recent passing of one of the cats, Susan Nordstrom writes:

We recognized the urgency of our shared multispecies inquiry, with the recent death of one of the cats, Amelie. In the intense singularity of death, we became very aware of how we tune and tend together—everyday practices in which humans (themselves animals) and animals live and perceive together—and how these practices shape our everyday lives. These practices are acts of multispecies survival in which we learn how to live and die together. We weave our multispecies living-dying together with the theories of Haraway and Rautio. Writing together as we disrupt the categories between humans and animals, human-centered philosophical concepts, and human-centered narrative inquiry. In so doing, we offer an evocative multispecies narrative that tells a different story, a becoming with multiple species in naturecultures.

Setting aside the pure lunacy of listing cats as co-authors, it is difficult for this to pass as serious scholarship. Although this was published in an “open peer review” journal—a less rigorous standard than traditional scholarly peer review—taxpayers would be forgiven for questioning the efficacy of a professor at an accredited university that receives federal funding publishing a paper on how she dealt with the death of her cat.

Unfortunately, this is not an outlier. Other examples of outlandish academic papers published by American universities include:

College professors are—and should be—free to explore intellectual pursuits of interest to them and advances to their scholarly work and that of the field in which they are situated. But American college graduates are $1.5 trillion in outstanding student loan debt, and there is a growing perception of a dwindling return on investment.

It is no wonder that the majority of Republican voters now believe that colleges and universities have a negative effect on the country, according to a recent Pew Research poll.

Perhaps if higher education operated more like a market and relied less on federal support, with a healthy mix of private student loans and quality assurance measures, we might see academics and skill-based learning better aligned with the needs of the economy.

Until then, at least cat owners everywhere can rest assured that American professors are ready to help address “the urgency of our shared multispecies inquiry.”