The Inter-American Development Bank’s Next President Should Advance Rule of Law, Free Markets 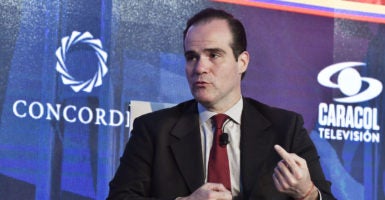 The Trump administration announced its plan to nominate Mauricio Claver-Carone as the next president of the Inter-American Development Bank. (Photo: Gabriel Aponte/Getty Images/Concordia Summit)

The Trump administration recently announced its intention to nominate Mauricio J. Claver-Carone for the presidency of the Inter-American Development Bank Group, a Washington-based regional development bank that has a $97 billion loans portfolio across Latin America.

Claver-Carone currently serves as the deputy assistant to the president and senior director for Western Hemisphere affairs at the National Security Council.

Treasury Secretary Steven Mnuchin noted that “the [Inter-American Development Bank] is at a critical juncture as the region faces growing challenges to economic growth and sustainable development, particularly in light of the global pandemic.”

If approved by member states, Claver-Carone would replace Luis Alberto Moreno, a Colombian diplomat who has been at the development bank’s helm since 2005.

The mission of the Inter-American Development Bank is to encourage economic development and poverty reduction by advancing economic freedom. It ensures that dynamic and inclusive growth can occur for a greater number of ordinary people.

Economic freedom, cultivated and enhanced by the rule of law, limited government, regulatory efficiency, and market openness, is critical to generating the widespread economic dynamism that brings more opportunities for people to work, produce, and save.

As the index has shown unambiguously over the past 26 years, adopting polices that advance economic freedom is the key to unlocking broad-based growth reinforced by a virtuous cycle of opportunity, empowerment, and development.

Particularly for Latin America, it is critical more than ever to improve transparency and advance the rule of law, a critical pillar of a well-functioning free market.

As reported by the 2020 index, the rule of law remains shallow in many Latin American countries, with widespread corruption and still-weak protection of property rights exacerbated by poor judicial independence.

Responding to China’s corrupting influence within Latin America should be a key agenda item for the bank’s next president. China’s engagement with the region has significantly ramped up over the last few years, and the lack of transparency in its relationships has facilitated poor governance and illicit activity.

Unfortunately, corruption in Latin America has been, to quote an article from The Lancet Infectious Diseases journal, an “ignored pandemic.” While some progress has been made in the past decade to consolidate democracies in the region, corruption continues to tarnish prospects for lasting prosperity and security.

Assessing Latin America’s ability to “detect, punish and prevent corruption amid the ongoing coronavirus pandemic,” a study by Americas Society and Council of the Americas highlights:

COVID-19 is hitting Latin America at a moment when the region-wide anti-corruption wave of recent years is losing force and, in some places, is dangerously receding. Corruption has historically been a hurdle for Latin America, undermining growth, democracy and governance, and violating the rights of millions.

Washington has an abiding geopolitical interest in Latin America, an interest that derives from America’s close economic, cultural, and demographic ties. Without transparency and functioning markets buttressed by effective law and order, the region’s representative governments and economies can neither survive nor thrive.

Advancing the rule of law and economic freedom should be a core mission for the next chief of the Inter-American Development Bank.