Obama Called Conservatives Hypocrites on Solar Energy and Free Markets. Here’s What He Got Wrong. 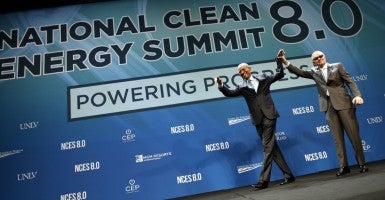 President Obama is having a hard time with the definition of free market.

The most recent example came from his remarks at the National Clean Energy Summit, an event hosted by Senate Minority Leader Harry Reid, D-Nev., to promote solar power.

Obama told a crowd in Las Vegas that solar and renewables now make economic sense and blasted conservative think-tanks for being insincere when it comes to the free market. He said, “Now, it’s one thing if you’re consistent in being free market. It’s another thing when you’re free market until it’s solar that’s working and people want to buy and suddenly you’re not for it any more.”

The way America does solar is not free-market.

If solar made as much economic sense as Obama purports, it wouldn’t need help from Washington or continually push to extend the handouts it receives.

If solar operated in a free market, taxpayers wouldn’t have lost more than half a billion dollars on Solyndra.

Private investors would have taken that risk and lost their own money—or even better—made money. But instead we have policies where well-connected special interests and campaign donors direct how taxpayer money is spent and where private capital flows. The well-connected investors stand to reap all the profits, and the taxpayers bear all of the risk.

The market-distorting handouts for solar come in a variety of forms. The solar industry benefits from a generous 30-percent targeted investment tax credit, state grant and incentive programs, a taxpayer-funded initiative at the Department of Energy to lower the cost of solar, net metering policies that shift the costs of solar users to non-solar residents, taxpayer-backed federal loan guarantees, and Department of Defense mandates.

How are any of these viewed as free-market? Only through the lens of the Obama administration.

In fact, in the same speech, Obama announced a handful of new subsidies to prop up the solar industry on the backs of taxpayers and defended one of the biggest state-led anti-free-market policies: renewable electricity standards.

Renewable electricity standards mandate that a state must produce a certain amount of its electricity from renewables by a certain date.

Mandates that guarantee a share of the market and do not require innovation or competitive practices to lower costs and compete with other energy sources are not free-market.

Rent seeking occurs when politicians dictate how private-sector resources are spent. The industries that stand to benefit from or be harmed by those policy decisions will increase their lobbying for government handouts and to prevent their competitors from receiving the handout.

Obama also boasted that the “solar industry now employs twice as many Americans as mining coal.” First of all, when your administration empowers overzealous regulators to implement job-crushing regulations on the coal industry with no meaningful direct environmental benefit, the number of coal miners working an honest day’s work is going to shrink.

Secondly, solar employing twice as many as the coal industry is not the right metric for success or progress.

The reality is, we’re getting dramatically less energy bang for our subsidized solar buck.

If the goal were simply to create jobs, we could rid the world of mechanical equipment and hire workers to dig our ditches. But the result would be a less prosperous United States and a lot of lost value creation, which would ultimately destroy more jobs than it created.

Subsidizing energy technologies directs labor and capital away from its most efficient use.

At Heritage, we’ve consistently pushed to end subsidies for all energy sources and technologies, including fossil fuel and nuclear subsidies.

We’ve identified barriers to break down to make renewables more competitive. We want to end cronyism and the political process that picks winners and losers and allow the market to determine what provides America with reliable energy at competitive prices.

Obama criticized opponents of his plan for standing in the way of progress.

But it’s his very policies that obstruct long-term progress of the industries they want to succeed and try to promote.

Instead of relying on a process that rewards competition, taxpayer subsidies prevent a company from truly understanding the price point at which the technology will be economically viable.

If the industry can compete without crony government programs, then that will be actual progress, and families and businesses will be better off as a result.

But let’s not pretend that solar is operating in a free-market environment. Instead, let’s open access to resources, remove all government favoritism, and unshackle energy sources and technologies bogged down by regulatory obstacles.