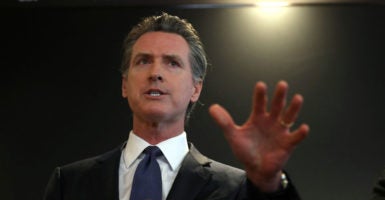 California Gov. Gavin Newsom speaks during a news conference Feb. 27 at the California Department of Public Health in Sacramento, the day after his state reported its first apparent case of COVID-19 through community spread. (Photo: Justin Sullivan/Getty Images)

If elected officials were to suspend the deduction of union dues from the paychecks of public-sector employees for three months, they could pump tens of millions of dollars back into the wallets of workers who are compelled to stay home, according to a free market think tank’s analysis of government records.

The savings would be particularly dramatic in California, which has more than 1.25 million public employees, the Freedom Foundation explained in a letter to Gov. Gavin Newsom, a Democrat.

The letter notes that California’s public employees pay an average of $800 a year in dues.

A three-month moratorium on deduction of government union dues “would pump $250 million back into the pockets of workers who earned them and need them during this emergency,” Bob Wickers, California director for the Freedom Foundation, said in the letter to Newsom.

“The best part is you could boost our state’s economy by nearly $250 million without costing California taxpayers a dime,” he wrote.

Newsom’s order exempts some critical infrastructure projects and government services. With tens of thousands of California residents, including public employees, told to stay at home, a temporary moratorium on deducting union dues could have significant economic benefits, Wickers told The Daily Signal in a phone interview.

“The dollars add up pretty quickly here in California in terms of what can be injected back into the economy,” Wickers said, adding:

The [state] government withholds the dollars from the paychecks and then hands them over to a private corporation that’s called a union. Doing this for just three months puts $250 million back into the economy. This is a great way for government officials to do their part and for unions to do their part during the crisis.

Wickers said he had not received a response from Newsom to his letter and the Freedom Foundation’s request for a three-month moratorium on deducting union dues.

Wickers also said he hasn’t received a response from public-sector unions in California.

The five largest California unions and their locals that would be affected by a moratorium on dues are the California Teachers Association, an affiliate of the National Education Association; American Federation of State, County, and Municipal Employees Local 3939 and AFSCME Council 57; Service Employees International Union locals 1000, 1021, 2015, 99, 721, and 521; Teamsters 1932; and the California School Employees Association.

The Daily Signal sought comment from Newsom’s press office on the Freedom Foundation’s request, as well as those of the other four governors; they had not responded by publication time.

The Daily Signal also sought comment from the media offices of the unions, but none responded by publication time.

“Our elected officials have a great opportunity here to take immediate action that would help a lot of people in need,” Tom McCabe, CEO of the Freedom Foundation, said in a press release, adding:

Hardworking Americans need the money more than the unions do. Small businesses and working families are hurting. Wealthy government unions can do their part by temporarily forgoing the dues deductions so people can keep more of their own money, spend it in the private sector and get our economy rolling again.

The Freedom Foundation estimates that suspending the collection of union dues for three months would save public employees about $61 million in Ohio, $29 million in Oregon, $63 million in Pennsylvania, and $60 million in Washington.

In Ohio, public-sector unions responded to the proposed suspension of union dues in a report posted by Gongwer, a news service that covers state government in Michigan and Ohio.

Melissa Cropper, president of the Ohio Federation of Teachers, is quoted describing the Freedom Foundation as “union busters” who are “trying to grab a headline” during the COVID-19 pandemic.

Anthony Caldwell, director of public affairs for SEIU District 1199, said the Freedom Foundation “is pushing an anti-worker agenda that’s out of step with Ohio values.”

But Wickers, the foundation’s California director, said unions are well positioned to absorb a temporary loss of revenue that would benefit the very people they say they represent.

He points to financial records of the state’s five largest public-sector unions that show they maintain roughly 45% of their yearly income in cash reserves:

Unions are flush with cash and they are in better economic shape than most small businesses. Therefore, they should be able to make the sacrifice. Union organizing and political advocacy are not essential businesses. There is an opportunity here for them to row in the same direction everyone else is rowing in and this action would come at no additional cost to taxpayers.

Based on analysis of publicly available payroll data, Maxford Nelsen, Freedom Foundation’s labor policy director, compiled a chart highlighting the annual budgets of the top five public-sector unions in California and the percentage of the budgets that are held in cash. The chart above is based on Nelsen’s research.

“Governor Newsom must order this suspension. The unions will not do this voluntarily,” Wickers told The Daily Signal, adding:

In fact, a private hospitality union here in California just refused their membership’s request to suspend dues after they were all furloughed during this pandemic. There’s precedent for the union’s refusing to do this voluntarily and the need for this to be a Gov. Newsom declaration under the Emergency Services Act of California.