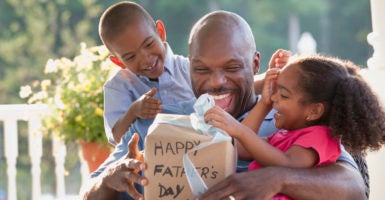 Getting back to normal after the coronavirus pandemic will require the strength of a dad and a family to make a full economic recovery, social scientist Warren Farrell says. (Photo illustration: Getty Images)

The COVID-19 crisis and racial tensions make Father’s Day more important this year than most, says a social scientist and author who argues for the importance of fathers, especially in the development of boys to men.

“We talk about no child left behind, but we also need to make sure no parent is left behind,” social scientist Warren Farrell, co-author of “The Boy Crisis: Why Our Boys are Struggling and What We Can Do About It,” told The Daily Signal.

“Almost all single mothers are overwhelmed. Many fathers feel left out. Children are hurt. It’s a perfect lose-lose-lose situation,” he said.

Few other Father’s Days could be as important as this one, Farrell said,  because getting back to normal after the coronavirus pandemic will require the strength of a dad and a family to restore full economic recovery.

The racial divide also won’t be solved, he said, until fatherlessness and the “boy crisis” are addressed.

“The boy crisis primarily resides where dads do not reside,” Farrell said.

Besides being a social scientist, Farrell is an author and speaker who taught five disciplines at the university level. The Financial Times ranked him among the top 100 thought leaders.

He was the only man elected three times to the New York City chapter of the National Organization for Women. He later became concerned that NOW’s advocacy was less about equality and more about a battle of genders that he considered destructive.

A “Father’s Catch-22,” Farrell said, means a father has to love his family by being away from the love of his family in order to provide for them. In this sense, he said, the societal lockdown that consumed the United States for most of the year so far has had an upside:

Even as COVID has deprived many dads of the ability to provide, it has allowed many children to value dad’s time as much as dad’s dime. It has helped many dads experience at a deeper level that while their career is for now, their children are forever.

Farrell frequently talks and writes about how fatherless homes are linked with higher rates of crime, suicide, dropping out of school, and lower earnings among males. What he calls “dad deprivation” disproportionately harms boys, Farrell said.

Previous research from The Heritage Foundation has shown the impact of fatherless homes on poverty as well as how intact marriages help children. Further, research has shown that government programs can in some cases make fathers less likely to be active in their children’s lives.

The Trump White House has shown interest in assembling a council with a goal to “Make the American Family Great Again,” Farrell said.

He has met with Trump administration officials at the White House about forming such a council, Farrell told The Daily Signal, but “they haven’t committed to anything yet.”’

The White House has not made any statement on a commission, but on Friday, President Donald Trump issued a Father’s Day proclamation.

“By raising children to be happy, productive, and responsible adults, fathers play a critical role in shaping our society,” Trump’s proclamation says, adding:

Our fathers set an example for us of how to be our best in every aspect of our lives. The lessons they teach us guide us as we strive to care for our families, succeed at school and at work, serve others, and contribute to our communities.

They are integral to raising future generations of Americans who will continue to build an ever-stronger nation. That is why my Administration continues to provide grant funding to organizations across our country that work to strengthen relationships between fathers and their children, foster responsible parenting, and help fathers find and keep gainful employment. Our Nation is indebted to the men who have embraced the great blessing and solemn duty of fatherhood.

Every day, they make sacrifices to ensure their children, whether by birth, adoption, or foster care, receive the care and affection they deserve. Today, we express our everlasting gratitude to our fathers and father figures for their love and commitment, and for all they have done to shape our lives.

Farrell said his research shows that boys and girls at age 9 commit suicide at the same rate, but by their early 20s boys commit suicide at almost five times the rate of girls. And the biggest single predictor of suicide in such cases is dad deprivation, he said.

The five most deadly school shooters of the 21st century were all dad-deprived boys, Farrell said.

Lack of fathers isn’t the only issue for boys. They drop out of high school at a 42% higher rate than girls and these dropouts experience an unemployment rate of more than 20% in their 20s—more than five times the national average.

Men between the ages of 25 and 31 are 66% more likely than women to live with their parents, Farrell said. Sometimes it’s one parent and sometimes both, so the cause isn’t always dad deprivation.

As an activist and author, Farrell advocates that divorced fathers play a bigger role in their childrens’ lives. He also contends that boys who hear only negative information about their fathers may come to have the same view of themselves.

The Trump administration’s Department of Health and Human Services sought out Farrell to speak at the 2019 National Fatherhood Summit. Administration officials are concerned that the destruction of the family threatens the nation, he said.

After Farrell spoke at the summit in Nashville, Tennessee, HHS official Steve Wagner invited him to a White House meeting with 14 attendees on establishing a fatherhood initiative.

Promoting fatherhood should be a nonpartisan matter, Farrell said, noting that President Barack Obama sometimes spoke about the importance of the issue. However, he said, he hasn’t had luck in reaching out to Democrat lawmakers and other politicians.

Democrat operatives were worried that talking about the relevance of fatherhood would alienate single mothers, divorced mothers, and lesbian mothers, Farrell said.

But since the mid-1960s, increasing fatherlessness has had four major impacts, he said: overwhelmed single moms; depressed fathers with neither purpose nor love; children who are more likely to be damaged in over 50 developmental areas; and “pockets of fatherlessness becoming pockets of crime.”

Framing the COVID-19 pandemic as a war, he said young men have a history of stepping up to serve their country in times of crisis.

“With the COVID crisis, we must call upon millions of our dads to serve America by returning to the family as loving dads,” he said.

Farrell calls on courts to drop a presumption that divorced fathers must fight to be with their children, which often hurts the poorest communities.

“With COVID creating the greatest challenge to American prosperity since the Great Depression, the economy will not recover if the government must financially remain a substitute parent,” Farrell said. “We must create a cultural shift from the rights of parents to the rights of children—knowing that, whenever possible, the best parent is both parents.”