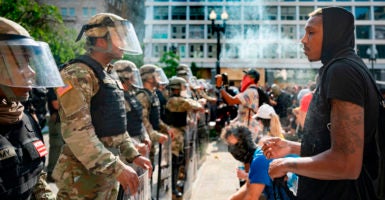 A demonstrator blows smoke at Army National Guard members as he and others protest on June 3 near the White House the death in police custody of a black Minnesota man, George Floyd. D.C. Mayor Muriel Bowser sought to force National Guardsmen out of a D.C. hotel where some were staying. (Photo: Jim Watson/Getty Images)

Muriel Bowser, the mayor of Washington, D.C., on Friday ordered National Guard troops, who were in the nation’s capital to quell civil unrest and looting, out of their hotel rooms. The move drew a sharp rebuke from a senator whose home state sent some of those troops.

Bowser reportedly planned to evict 1,200 National Guard troops from their hotel rooms. That included 200 guardsmen from Utah, who were reportedly staying at a Marriott hotel near downtown Washington.

“Evicting Utah National Guard personnel from their hotels after a late-night shift risking their lives to protect Washington is a shameful, petty, discrediting decision by Mayor Bowser,” Sen. Mike Lee, R-Utah, said in a public statement.

The 200 Utah guard troops were deployed to Washington on short notice earlier this week, and finished their overnight Thursday shift at 3 a.m. on Friday, according to Lee’s office. They were forced out of their hotel by 11 a.m., ahead of another shift Friday evening at 6 p.m. until 2 a.m. Saturday morning, the Utah lawmaker’s office said.

“Our Utah guardsmen are consummate professionals who are not complaining in the slightest,” Lee added. “But their labor and sacrifice on behalf of Washingtonians deserves better than this embarrassing spectacle.”

Bowser’s office did not respond to an email inquiry and could not be reached by phone on Friday. The mayor has opposed President Donald Trump’s move to use the military to stop the rioting in the city.

“If Mayor Bowser has a problem with President Trump, she should take it up with him, not take it out on National Guard personnel in the middle of a dangerous deployment in her city,” Lee added.