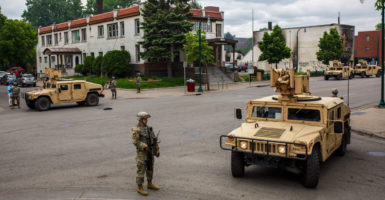 The National Guard has stepped in to quell the violence in Minneapolis in the wake of riots that occurred over the death of George Floyd.

President Donald Trump tweeted, “The National Guard has arrived on the scene. They are in Minneapolis and fully prepared. George Floyd will not have died in vain. Respect his memory!!!”

Trump also tweeted last week, “Just spoke to Gov. Tim Walz and told him that the Military is with him all the way.“

It is the responsibility of state and local leaders to ensure that adequate law enforcement resources, including the National Guard where necessary, are deployed on the streets to reestablish law and order.  …

Federal law enforcement actions will be directed at apprehending and charging the violent radical agitators who have hijacked peaceful protest and are engaged in violations of federal law.

Since the military is supposed to fight international conflicts and not be engaged in domestic law enforcement, the use of federal troops has been rare. However, it has happened under several presidents, not just Abraham Lincoln, who had to use the military to stop a full-scale rebellion.

Two laws deal primarily with federal troops in domestic matters, according to the Congressional Research Service.

After the passage of the 14th Amendment, another provision was added to the Insurrection Act that allows the president to use the military without the consent of a state government to suppress any “insurrection, domestic violence, unlawful combination, or conspiracy.”

This is only if state law enforcement is unable to protect citizens and the criminal conduct “obstructs the execution of the laws of the United States or impedes the course of justice under those laws.”

This section was enacted to implement the 14th Amendment, which gave citizenship and other legal rights to African Americans, and does not require a request from or even the permission of the governor of the affected state.

The Posse Comitatus Act of 1878 further defined but didn’t supplant the Insurrection Act. The law was enacted as post-Civil War reconstruction was winding down in the south, and outlawed the use of the military for law enforcement.

This law made it illegal for civilian law enforcement to use military investigators, prohibits use of the military if it “pervades the activities” of the civilian officials and prohibits subjecting citizens to military power that is “regulatory, prescriptive, or compulsory in nature.”

His father, President George H.W. Bush, used the insurrection law to send federal troops to Los Angeles in 1992 to restore order in the city after the riots that erupted after a jury acquitted police officers who were caught on camera beating up Rodney King, an African American.

The elder Bush also sent federal troops to St. Croix in the U.S. Virgin Islands, at the request of the territorial government, in 1989 to restore order from civil unrest after Hurricane Hugo.

Among the most dramatic events occurred in 1957 when Arkansas’ Democrat Gov. Orval Faubus tried to face down Republican President Dwight Eisenhower over desegregation of schools.

In late September, about 1,000 whites formed outside the school and a riot ensued.

So, Eisenhower issued Executive Order 10730 that specifically noted the provision of the Insurrection Act that allows federal troops to take action in lieu of a request from the state government. Eisenhower federalized the Arkansas National Guard and then sent the 101st Airborne Division into Little Rock to quell the riots.

In a televised address, Eisenhower said, “Our enemies are gloating over this incident and using it everywhere to misrepresent our nation. … Mob rule cannot be allowed to override the decisions of the courts.”

Finally, on Sept. 25, 1957, the “Little Rock Nine” attended Central High for their first full day of classes, this time protected by the Arkansas National Guard and the other federal troops. The students continued to face threats, but still attended school until the end of the school year.

The defeated Faubus retaliated in September 1958 by closing down Little Rock high schools for the year, but the high schools reopened in August 1959 after a federal court struck down the closing.

Other cases in the 20th century would include notable presidents.

In 1932, an already unpopular Republican President Herbert Hoover sent U.S. troops to disperse a group of 20,000 World War I veterans in the Washington Mall. The unemployed veterans were seeking bonus payments from Congress, and it became known as the “Bonus March.”

However, some of the veterans ended up in a physical confrontation with police. So Hoover called in the military, which included tanks. Gen. Douglas MacArthur led armed military men against unarmed veterans, a bad look for the government in newspaper photos and in newsreels then being shown at movie theaters.

Accompanying MacArthur were two other future World War II heroes, then-Maj. Eisenhower and then-Maj. George S. Patton. The military fired mostly tear gas at the veterans. Still, The Washington Post would report one veteran was killed and 60 were hurt after the gas bombs and flames.

In 1919, President Woodrow Wilson, a Democrat, ordered federal troops to stop race riots in 20 cities across the United States. The first of the riots occurred in Chicago, erupting in part from the post-war social tensions and competition over jobs.