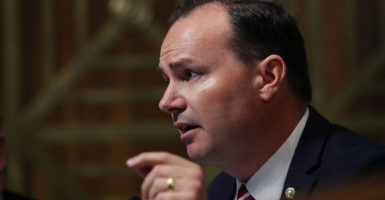 Should a president of the United States have the authority to remove from office those principal officers he appointed to serve in his administration, and who were confirmed by the Senate?

That’s the gist of the latest bill by Sen. Mike Lee, R-Utah, aptly called the Take Care Act, which he introduced on Wednesday. (The Heritage Foundation will be hosting an event with Lee about the Take Care Act on June 18.)

The act would, according to Lee’s office, restore “the original understanding of the president’s constitutional power to remove his subordinates.” It would eliminate “all existing restrictions on the president’s power to remove upper-level executive branch officers” and would require Congress to “expressly and with specificity establish such [future] restrictions by statute.”

Furthermore, it would eliminate other impediments “to the president’s directive authority, such as restrictions on the White House’s review of independent agency communications.”

The goal is a noble one—namely, to “restore the original understanding of the president’s power to take care that the laws are faithfully executed.”

Setting aside the issue of whether this bill has any chance of becoming law in light of the current political environment, it is emblematic of a consistent theme in Lee’s work as both a constitutional scholar and a United States senator—specifically, the restoration of the separation of powers among the three branches of the federal government and between the federal and state governments as separate sovereigns.

Lee emphasizes this theme in the legislation he introduces, the speeches he gives, and the books that he writes.

A deep thinker and legal scholar, Lee is steeped in the history of the founding of the United States, the Constitution and the debates surrounding its creation, and the structural protections built into our democratic republic.

A prolific and gifted writer, Lee, who clerked for Justice Samuel Alito on the Supreme Court, has written three books dealing with our Founding Fathers, the Constitution, and the Declaration of Independence.

The Take Care Act, like many of his other legislative efforts, attempts to draw clear lines regarding who has the authority to remove executive branch officials.

This is an important issue, since any limitation on the president’s power in this regard makes it difficult for the voters to truly hold him accountable for non-performance by those officials, and can result in executive branch officials frustrating the agenda of the administration under which they serve.

In Federalist No. 47, James Madison wrote about the separation of powers:

The accumulation of all powers, legislative, executive, and judiciary, in the same hands, whether of one, a few, or many, and whether hereditary, self-appointed, or elective, may justly be pronounced the very definition of tyranny.

For example, in March, Lee introduced S. 764, the ARTICLE ONE Act. An attempt to curb the power of the executive, this bill would place an expiration date on a national emergency declaration. After 30 days, the declaration would cease to exist unless Congress chooses to approve it, in which case the national emergency would last one year.

No doubt this bill was an attempt to rein in a president’s ability to unilaterally declare a national emergency of potentially limitless duration, taking into consideration that 32 presidential declarations of national emergency remain in effect dating back to the Carter administration.

Lee also introduced S. 177, the Global Trade Accountability Act of 2017, which would require congressional approval for executive actions pertaining to trade and tariffs.

In the same vein, Lee introduced S. 409 in 2017, the Military Humanitarian Operations Act, to provide greater clarity to the term “military humanitarian operation” in order to limit the president’s ability to bypass congressional approval under the War Powers Act for the deployment of troops to address a humanitarian crisis.

Lee also co-sponsored S. 92, the REINS Act. As an amendment to the Congressional Review Act, this bill would require congressional approval for rules made by executive branch agencies that would have an impact on the economy of $100 million or more.

He also co-sponsored S. 909, the Separation of Powers Restoration Act, which would, to quote from the seminal case of Marbury v. Madison, restore the ability of federal judges “to say what the law is” rather than to defer to interpretations of law provided by executive branch agencies that are charged with enforcing those laws.

Regardless of what one thinks about these individual bills, the importance of debating separation of powers issues and the structural protections provided in the Constitution cannot be overstated. As Justices Anthony Kennedy, Antonin Scalia, Clarence Thomas, and Samuel Alito said in their joint dissent in NFIB v. Sebelius:

Structural protections—notably, the restraints imposed by federalism and separation of powers—are less romantic and have less obvious a connection to personal freedom than the provisions of the Bill of Rights or the Civil War Amendments. Hence they tend to be undervalued or even forgotten by our citizens. It should be the responsibility of the court to teach otherwise, to remind our people that the Framers considered structural protections of freedom the most important ones, for which reason they alone were embodied in the original Constitution and not left to later amendment. The fragmentation of power produced by the structure of our government is central to liberty, and when we destroy it, we place liberty at peril.

Imagine a United States Congress where leaders debate big ideas in a collegial manner, and give speeches that other members listen to and learn from, regardless of party affiliation. That Congress would take up the Take Care Act, debate it, discuss its merits and weaknesses, call constitutional scholars as witnesses to learn from the experts, and weigh the efficacy of such legislation and about the importance of the original understanding of the separation of powers, which was so brilliantly laid out by the Framers in our Constitution.

Unfortunately, that Congress does not exist today. So until then, Lee’s crusade will continue, bill by bill, book by book, and speech after speech, until some day when, hopefully, the climate on Capitol Hill changes for the better.

This article has been updated to correct a reference to Federalist No. 47.