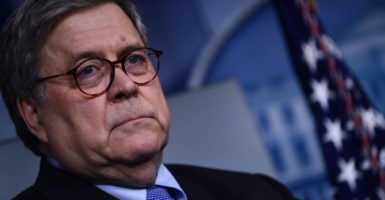 "The Constitution is not suspended in times of crisis. We must therefore be vigilant to ensure its protections are preserved, at the same time that the public is protected," writes Attorney General William Barr, pictured in the White House press briefing room March 23, in a new memo. (Photo: Brendan Smialowski/AFP/Getty Images)

Attorney General William Barr on Monday directed U.S. attorneys to “be on the lookout” for state and local governments violating constitutional rights of individuals during the strict COVID-19 restrictions at the state and local level.

“Many policies that would be unthinkable in regular times have become commonplace in recent weeks, and we do not want to unduly interfere with the important efforts of state and local officials to protect the public,” Barr states in a memo to U.S. attorneys.

“But the Constitution is not suspended in times of crisis,” he added. “We must therefore be vigilant to ensure its protections are preserved, at the same time that the public is protected. I thank you for your attention to this important initiative and for your service to our country.”

Barr is directing Assistant Attorney General for Civil Rights Eric Dreiband, and U.S. Attorney Matthew Schneider, of the Eastern District of Michigan, to monitor state and local policies and, “if necessary, take action to correct them,” the memo says.

“These kinds of restrictions have been necessary in order to stop the spread of a deadly disease but there is no denying that they have imposed tremendous burdens on the daily lives of all Americans,” Barr acknowledges in the memo.

In the memo Barr specifically notes the importance of upholding the rights of religious believers, writing:

As the Department of Justice explained recently in guidance to states and localities taking steps to battle the pandemic, even in times of emergency, when reasonable and temporary restrictions are placed on rights, the First Amendment and federal statutory law prohibit discrimination against religious institutions and religious believers.

“The legal restrictions on state and local authority are not limited to discrimination against religious institutions and religious believers,” the Monday memorandum adds.

“For example, the Constitution also forbids, in certain circumstances, discrimination against disfavored speech and undue interference with the national economy,” Barr continues.

“If a state or local ordinance crosses the line from an appropriate exercise of authority to stop the spread of COVID19 into an overbearing infringement of constitutional and statutory protections, the Department of Justice may have an obligation to address that overreach in federal court.”

Barr previously directed federal prosecutors to prioritize cases against price gauging from the pandemic, from either hoarding scarce medical resources to sell them for extortionate prices or committing fraud against the ill.