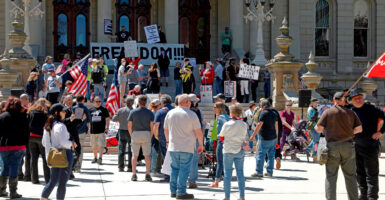 During the past several months, COVID-19 policies have stretched the constitutions of Michigan and other states, as well as the U.S. Constitution.

Governors across the country have governed by executive order instead of working with their legislatures or county health departments on solutions. This distorts the separation of powers in our constitutions, both state and national.

In my home state of Michigan, Gov. Gretchen Whitmer has issued more than 160 executive orders, which cover such issues as training requirements for pharmacists, establishing a food security council, and setting safety requirements for grocery stores, restaurants, and pharmacies.

The constitutional overreach of a few of the orders caused the Republican Legislature to sue the Democratic governor over two executive orders declaring an emergency.

One executive order was upheld by a lower court and the other was struck down. The Legislature is appealing the first and the governor is appealing the second. Because of the urgent nature of these lawsuits, a judge recently sent them directly to the Michigan Supreme Court.

Meanwhile, Unlock Michigan, a coalition of citizens concerned about Whitmer’s lockdown orders, has started a petition drive for November to repeal the 1945 Emergency Powers of Governor Act, which has no time limit. The petition would keep the 1976 Emergency Management Act, which requires the Legislature to approve the state of emergency every 28 days.

Governors across the nation have executed some controversial executive orders during the pandemic. In the process, the U.S. Constitution is being stretched.

For example, although the First Amendment ensures freedom of the press, Whitmer changed the traditional pool-based system of press conferences to a Zoom system that required reporters to submit questions ahead of time.

The First Amendment right that allows churches to gather has been a national issue throughout the lockdowns.

In defiance of their governor’s order in late May, a few Illinois churches exceeded a 10-person limit for in-person worship. They filed a lawsuit challenging her policy, pointing out that liquor stores, marijuana dispensaries, and superstores were open.

Across the nation, churches have been divided about following the mandates. Some are obeying them by meeting outdoors, wearing masks, and keeping social distance. Services are livestreamed for those who choose not to attend in person.

Others have ignored indoor mandates on numbers by wearing masks and keeping social distance. A few have held large outdoor services, mostly without masks.

Americans’ rights under the Second, Fifth, and 14th Amendments also have been stretched.

On April 15, more than 3,000 people gathered in Lansing, Michigan, mostly in cars, for Operation Gridlock, defying Whitmer’s stay-at-home orders—which have been among the most restrictive in the nation. Some left their cars to protest, most without masks.

Four Michigan residents filed a lawsuit against the governor, alleging that the stay-at-home orders violated their Fifth Amendment and 14th Amendment rights to due process. One plaintiff owns a landscape company and had to lay off 15 workers.

Between 800 and 1,000 protesters returned April 30. A few were carrying weapons and tried to enter the Capitol. Michigan has no law prohibiting guns in the Capitol, but the protesters were stopped by state police.

Legislators debated the policy afterward. Perhaps a simple solution is to not allow loaded guns inside the Capitol.

Unfortunately, this is an election year, so more money has been spent on the federal, state, and local levels than otherwise would have been the case.

We are piling up debt that our children and grandchildren will have to pay back.

The governor’s emergency and disaster orders expired April 30 after 28 days, under the 1976 law (the Legislature needs to approve any extensions).

This didn’t stop Whitmer from again declaring a state of emergency and disaster under the 1945 and 1976 laws. Her action prompted the lawsuits.

We should assume our leaders have good intentions about what to do during this pandemic. However, we ought to have a robust policy debate within the bounds of the U.S. Constitution.