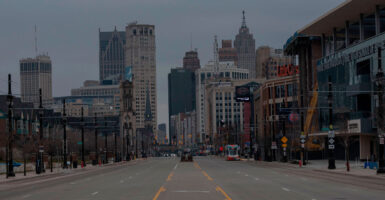 Metro Detroit, seen here nearly empty on March 24, was one of the hardest-hit areas in the nation. However, Gov. Gretchen Whitmer’s reopening efforts are considered by many to be far too slow. (Photo: Seth Herald/AFP/Getty Images)

Probably no topic since World War II has dominated the news as long as COVID-19 has. Many articles have focused on the policy differences between states and countries.

Unfortunately, under the leadership of Michigan Gov. Gretchen Whitmer, the state’s policies are failing on both accounts.

Metro Detroit was one of the hardest-hit areas in the nation, probably due to travel related to the auto industry. Whitmer, a Democrat, has allowed businesses to reopen slowly. Many think too slowly.

For example, after the first few weeks, when all Michigan businesses were developing plans to safely reopen, landscape companies, outdoor painters, carryout restaurants, and most construction companies could have reopened. The “essential” businesses should have quickly shifted to “safe to reopen” businesses.

Generally, officials shut down entire states instead of simply targeting hard-hit counties. Surely, Douglas County, Nebraska, which includes Omaha and has a population density of 1,680 per square mile, has different needs than Cherry County, Nebraska, which is larger in size than Connecticut with a population density of less than one person per square mile.

Compare that to Manhattan, which has a population density of 71,000 per square mile, plus many commuters.

Whitmer could have left open Northern Lower Michigan and the entire Upper Peninsula—more than half the state’s area.

She could have said, “Please don’t travel to Northern Michigan if you’re from Metro Detroit,” and announced “customs checks” by  state police at the I-75 Zilwaukee Bridge.

“Are you from Wayne, Oakland, or Macomb County? Headed to your cottage? Do you have enough food to avoid going to grocery stores? OK, enjoy your trip.”

It seems disingenuous for Whitmer to close many businesses unnecessarily and then beg Congress for help. We are piling up debt that our children and grandchildren will have to pay back, either by higher taxes or inflating the money supply.

Some of the “essential” businesses that were open throughout the pandemic suffered large losses in gross income during March and April while people “sheltered in place.” Business picked up in May, allowing landscapers to operate as well as the sale of garden supplies and plants. But even essential businesses are unlikely to recover the lost income.

Other stores and restaurants fared worse, remaining closed until recently. Some of the smaller businesses will not survive. Many are highly leveraged, with expensive rent.

However, owning the building is no guarantee if your business folds. The owners of Kim’s Restaurant in Troy retired after 44 years last August, but the building is still for sale.

Whitmer has issued more than 150 executive orders this year, the highest in the nation. The latest order is about the training of pharmacists. Many orders have been rescinded, but the governor is bypassing the Legislature with orders that look a lot like laws.

On June 1, Whitmer lifted the stay-at-home order for residents and allowed retailers, restaurants, and bars to reopen, but she kept gyms, hair salons, indoor theaters, and casinos closed.

In contrast, President Donald Trump has issued 35 executive orders so far this year.

It’s not right for the governor to pick winners and losers.

The big box stores and large businesses and companies will survive. Stores that sell groceries and paper products have thrived. For a while, Home Depot was not allowed to sell paint or other “nonessential” supplies. At least that kept the playing field level with smaller hardware stores, which remained closed. DoorDash, Amazon, FedEx, UPS, and the Postal Service have increased their business.

The state prohibited orthopedic surgeons from doing surgeries until around July 1. If my broken fibula had happened during the COVID-19 crisis, I probably could not have had “elective” surgery to close the 5-millimeter gap in my ankle joint and install a pair of plates on the broken bone.

People in pain waiting for joint replacements got an early taste of what single-payer socialized medicine (which has been relabeled “Medicare for All”) would be like.

“A woman’s health care, her whole future, her ability to decide if and when she starts a family is not an election,” Whitmer said. “It is a fundamental to her life. It is life-sustaining, and it’s something that government should not be getting in the middle of.”

I recently stopped at a new subdivision filled with construction vehicles, from landscaping to exterior and interior carpenters to window, drywall, and painting companies. Most of the 2,400-square-foot ranch houses have been sold. The construction manager said he was off work for six weeks. He was fortunate to have kept working for MI Homes. Many others in the construction industry were laid off, collecting unemployment.

Fortunately, houses are still selling well. MI Homes’ supply chain is still disrupted, though. Many suppliers had shut down to conserve cash, wary of a recurrence of the economic pain of 2000-2010 (which included the high-tech auto industry recession and the 2008 mortgage crash).

One of the more tragic ways in which individuals have been affected by Whitmer’s inconsistency is increased depression from being unemployed. Past data indicates more suicides occur during times of extended unemployment. Work is life-sustaining, even if no income is lost.

Many senior citizens in Michigan have been in solitary confinement for four months, with the only visitors appearing through closed windows and talking on cellphones. The fortunate ones live on the first floor.

Surely there can be a safe alternative to this.

Whitmer needs to be reminded that the right way to lead a state during a pandemic is to keep people safe and flourishing. All people.