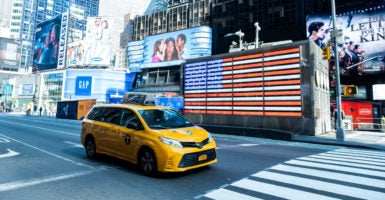 The coronavirus pandemic has reignited a sense of community, charity, and personal responsibility that many people feel had been lost in America. (Photo: Ira L. Black/Corbis/ Getty Images)

When the nongovernmental National Coronavirus Recovery Commission was first formed in early April, commissioners requested that citizens submit comments and ideas to help it formulate recommendations that governments, businesses, and civil society could use to combat both the health and economic effects of COVID-19.

Those comments have provided some critical insights into how Americans feel about America’s response to the coronavirus.

Within 10 days, the commission received hundreds of submissions, most expressing frustration with the heavy-handed actions by states to halt everyday life, shut down businesses, and prevent people from earning a living. People also remain concerned about the intrusions on their civil liberties.

The responses commissioners received don’t just give us a sense of what the American people want, but show that they want to be part of the solution. Comments included pages and pages of specific ideas for testing for the disease, isolating the virus, and reopening businesses.

Respondents understand the need to slow the spread of the virus so hospitals can have enough equipment and staff to manage the caseload. However, now that we’ve slowed the spread, they’re anxious to get back to life and work.

They want to reopen small businesses, restaurants, and retail, and they seem willing to make some pretty big changes to do it, like maintaining mandatory social distancing, prohibiting large public gatherings, quarantining people with symptoms, and wearing masks in public consistently.

A new mantra may be emerging in business: “No shoes, no shirt, no face mask—no service.”

The commission is working to balance public health concerns with this need to get back to work and to life with others. The reality is, this is not an either-or situation: A nation decimated by disease cannot have a functioning economy, and a catastrophic loss of jobs wreaks horrific damage on both mental and physical health.

The commission sees the disease and the economic damage ravaging America as twin foes, and it’s necessary to defeat them both. Commissioners are prioritizing getting people back to work, but only as soon as it’s safe enough to do so.

Carol, an owner of a small professional firm in California, summed up the squeeze on small business owners: Her firm won’t survive if we don’t get back to “normal” within a month.

Though her employees are working from home, her business’ income is cut in half while expenses remain almost constant. She has laid off people, and the higher-paid professionals who work for her are electing to go without pay so other staff can still get paid.

Many respondents are concerned that governors have overreacted and they’re beginning to mistrust those in control. They’re worried that governors, members of Congress, and other politicians are enjoying their expanded power and see the situation as a means to achieve their political agenda.

Of course, it doesn’t help when some politicians have openly admitted that.

People are also very concerned about their civil liberties: The justness of forcibly quarantining everyone, not just the sick; potentially mandatory vaccinations; and using cellphone GPS to track if we’ve been around infected people.

While most suggestions were well thought-out, some left us scratching our heads. Like the suggestion to eat baking soda to make your body less acidic and a less appealing environment for the virus. Don’t try that one at home. You can’t change the pH of your cells by anything you eat or drink.

There are some positive lessons that have emerged from this experience, as well.

Many parents have been forced to homeschool, which has allowed their children to escape the identity politics and far-left indoctrination that’s found in many schools. Politicians should use this experience to change laws to make homeschooling a more accessible option after the crisis subsides.

This pandemic has also opened many eyes as to America’s dependence on China for the production of medical supplies, pharmaceuticals, personal protective equipment, and other essentials, including food.

Not only has the Chinese communist government covered up information about the virus, it also sees America as a rival needing to be subdued.

Perhaps this will be the needed impetus to lessen our reliance on a government hostile to our nation and our freedom.

Finally, the coronavirus pandemic has reignited a sense of community, charity, and personal responsibility that many people feel had been lost in America.

Today, we have an unprecedented opportunity to take advantage of this renewed sense of citizenship, one of the key elements of American greatness.

It’s time to recapture that spirit and teach it once again to our children, because a deep sense of citizenship won’t just help us recover from this crisis, it will ensure a stronger and more united America for generations to come.