3 Reasons Why States Shouldn’t Get a Congressional Bailout 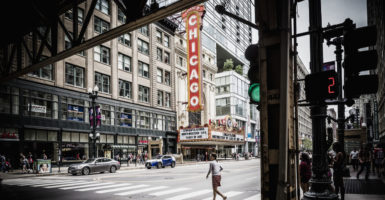 If Congress were to fulfill Illinois’ request for a $40 billion bailout and provide the same amount on a per capita basis to the rest of the states, the price tag would top $1 trillion. (Photo: Massimo Borchi/Atlantide Phototravel/Getty Images)

Although the letter comes under the guise of unprecedented COVID-19 disruptions, the purposes for which Illinois and other states seek additional federal funds are anything but unprecedented. Opening the floodgates to federal taxpayer dollars to cover states’ self-imposed fiscal woes would only lead to even further fiscal recklessness.

1. Congress already provided enough COVID-19 relief—states want unfettered funds. The Illinois letter makes clear that the state doesn’t need any more money to combat COVID-19. And, given the possibility that states are having to devise new spending related to COVID-19 just in order to use up the $150 billion they’ve already received, it’s clear that states have enough funds to combat the virus.

States have already received an unprecedented amount of federal funding, including both direct and indirect support.

For starters, the federal government has directly provided:

But state and local governments will also benefit significantly from the funds that flow through to their businesses and residents. By keeping more workers employed, these programs will reduce states’ unemployment and other safety net program costs, and by raising income levels, they will result in higher income and sales tax receipts for states. Some of that indirect funding includes:

States have already received plenty of federal funds and aid for COVID-19. It is true that restricting the spending to COVID-19 costs has caused some states to squander the funds instead of returning them to the federal government (such as providing temporary pay raises and bonuses to public-sector workers, even as tens of millions of private-sector workers have lost their jobs and paychecks). But Congress did not intend for federal taxpayers to absorb states’ revenue losses or pay for spending unrelated to COVID-19.

A better alternative to granting states additional funds with fewer restrictions would be to remove existing unfunded federal mandates.

2. The money would reward decades of reckless mismanagement, including bailing out unfunded pensions. COVID-19 measures have been in place now for about five weeks, but states’ unfunded pension systems—the driving force behind states’ fiscal woes—are closer to five decades in the making.

Across America, state and local governments have promised at least $5 trillion more in pension and other post-employment benefits than they’ve set aside to pay.

Illinois’ letter requested $10 billion for its insolvent pension system—an amount that would cover one year’s worth of the state’s pension costs, or about five years’ worth of the shortfall between what the state is required to contribute and what it has actually contributed.

Having grown by 500% over the last two decades, Illinois’ pensions now consume over 25% of the state’s general funds budget and 36% of education spending.

Bailing out state pension funds would only prevent states from enacting much-needed reforms.

In Illinois, pension benefits have grown 900% since 1987 and the average Illinois public-sector worker retires in his 50s, receives benefits for more than 25 years, and collects between $1 million and $2 million in total benefits. Individuals with 30 years or more of service receive $67,000 per year and more than $2 million total in retirement.

3. The federal buck won’t stop here. First was tens of billions to cover states’ increased Medicaid and other social safety net program costs, and then over $200 billion in direct funding and up to $500 billion in short-term loans.

After the third bill—the CARES Act—was passed, there were requests for an additional $150 billion in unrestricted aid to states, a request from governors for $500 billion, and Illinois’ separate request for $40 billion.

If Congress were to fulfill Illinois’ request and provide the same amount on a per capita basis to the rest of the states, the price tag would top $1 trillion, with New York receiving $61 billion, Texas $92 billion, and California $125 billion.

The problem with using federal tax dollars to fund state and local governments is that it encourages fiscal recklessness and causes states to become dependent on the federal government.

When Congress provided additional Medicaid funds through 2010 in its 2009 stimulus package, more than half the states built their fiscal year 2011 budgets around the assumption that Congress would extend the additional aid.

But instead of providing relief, federal aid to states has freed up resources to increase other spending. The federal share of state budgets already increased by 23% between 2000 and 2017—to federal taxpayers paying for 32% of states’ costs. Further aid, even if under the guise of “COVID-19” aid, will only cause this share to rise further.

COVID-19 is a public health crisis, not a pretext for states to request funding for things that are their own responsibility. Going into COVID-19, Illinois had only 42% of the recommended minimum level in its unemployment insurance fund, despite years of strong economic growth. And it had essentially $0 in rainy day funds.

States have already received more than enough support to combat COVID-19 and much of that support will flow through to alleviate their budgets.

Granting states additional, and largely unrestricted, funds would reward and encourage fiscal recklessness, and set a dangerous precedent for federal taxpayers to pay for an ever-increasing share of states’ budgets.