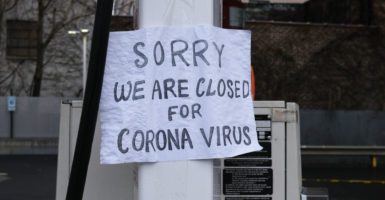 A sign at a gas station alerts customers that a business in Queens, which has one of the highest infection rates of coronavirus in the nation, is closed on April 3, 2020, in New York City. (Photo: Spencer Platt/Getty Images)

For a third week in a row, Americans have experienced never-before-seen levels of initial unemployment insurance claims as businesses continue to lay off workers amid COVID-19 closures and slowdowns.

Those claims were not included in the official March unemployment report, which showed an unemployment rate of 4.4% for March, because the survey period for it concluded during the second week of March, just before massive closures began.

Taking the past three weeks of initial claims into account, the actual unemployment rate is about 14% today.

Congress failed to pass a measure Thursday that would have helped prevent small businesses from having to lay off more workers.

Republicans wanted to expand the Paycheck Protection Program for small businesses by adding $251 billion in funding (bringing the total to $600 billion), but Democrats rejected that measure unless it were coupled with an additional $100 billion for hospitals and $150 billion for state and local governments.

The state and local funds could be used to reimburse governments for lost revenues. (Of course, the federal government is losing a lot of revenue, too.)

The goal of economic relief should be to keep workers attached to their jobs and incomes and to minimize business failures during the temporary health crisis.

It should not be to grant immunity to state and local governments to act without regard to the economic consequences of their decisions. All that will accomplish is an even greater economic downturn and a deeper fiscal hole, with the costs and consequences redistributed across all Americans.

Keeping workers connected to their employers amid this temporary health crisis is the most important thing Congress can do to save livelihoods and help the economy recover as quickly as possible once it’s safe to resume business activities.

But one of the ways policymakers intended to do that—through the Paycheck Protection Program, which provides loans and loan forgiveness to small employers who keep their workers employed—has been so popular that the funds are on track to run out.

Moreover, lending limits have caused some banks to close off applications, and borrowers that have applied face significant backlogs in processing applications.

But companies need the money now. The average small business has enough of a cash buffer to last only 27 days. Low-wage and labor-intensive businesses have even lower cash buffers.

We are now, as of April 9, on Day 25 of major closings and slowdowns that began March 16.

Small businesses are literally running out of money and no longer have the option of continuing to pay workers instead of laying them off.

Policymakers should not hold small businesses’ and workers’ livelihoods hostage to less pressing and even perverse spending requests.

By providing additional funds for the Paycheck Protection Program, allowing banks and the Small Business Administration to utilize rapid processing and approval procedures, and adding provisions to better target forgiveness to actual revenue losses, Congress could save millions more Americans from losing their jobs.