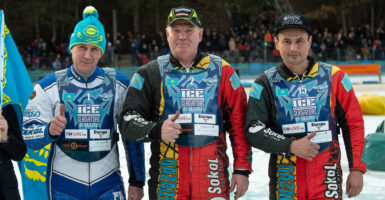 A significant improvement in fiscal health accounted for much of Kazakhstan's recent progress in economic freedom. Pictured: From left, competitors Pavel Nekrasov, Vladimir Cheblokov, and Denis Slepuchin of Kazakhstan are upbeat Feb. 29 at the Ice Speedway of Nations at Horst-Dohm-Eisstadion in Berlin. (Photo: Ian Charles/MI News/NurPhoto/ Getty Images)

Kazakhstan recorded the fifth-largest gain in economic freedom of any country in the world over the past year, according to The Heritage Foundation’s 2020 Index of Economic Freedom.

The country’s score (69.6 on a 0-100 point scale) puts it on the threshold of earning the index’s coveted “mostly free” designation. Ranked as having the 39th-freest economy in the world (out of 180 countries scored), Kazakhstan leads the Central Asia region in economic freedom.

A significant improvement in fiscal health accounted for much of the country’s recent progress.

Until the world economy was slammed by the novel coronavirus this spring, oil production had been booming, primarily because of a nearly $37 billion expansion of the Tengiz oil field.

Kazakhstan’s vast hydrocarbon and mineral reserves, especially in the Caspian Basin, form the backbone of its economy. The country is the world’s largest producer of uranium and has a large agricultural sector featuring livestock and grain.

The new government took office in 2019, intent upon boosting productivity, diversifying the economy away from hydrocarbons, reducing the role of the state, and increasing the efficiency of the bureaucracy.

Those goals would be advanced if long-standing shortcomings identified over the years by the index, including in government integrity, investment freedom, and financial freedom, were addressed. The country’s poor business environment, weak competition in some sectors, and long distances to global markets remain significant constraints.

Unfortunately, the necessity to recover from virus-induced economic damage must now be put at the top of that list of challenges.

According to U.S. News & World Report, Tokayev reported that the nation has not yet “passed the peak of coronavirus infections” and acknowledged that virus-related restrictive measures have greatly weakened the economy.

Recovery will be aided, however, by the adoption of measures to expand economic freedom that are outlined in the index.

To strengthen the rule of law and the protection of private property rights, the government must reduce bureaucratic hurdles and the undue influence of politically connected and wealthy elites.

To more effectively curb widespread corruption, the judiciary should be given more independence.

A greater challenge amid virus recovery will be to rein in government spending, which has amounted to 22% of the country’s gross domestic product over the past three years, producing budget deficits averaging 3.1% of GDP and public debt equivalent to 21.9% of GDP.

Improvements to one metric in the Index of Economic Freedom—investment freedom—will be vitally important in the recovery process.  Although foreign investment is officially welcome, unclear legal codes and inconsistent application of regulations have been deterrents to foreign direct investment.

Kazakhstan’s ongoing effort to transition from the Cyrillic alphabet to the Latin alphabet may help attract more foreign investors.

The unprecedented and global economic slowdown due to the virus is putting economic freedom at risk in Kazakhstan and around the world. Eventually, however, the virus will be defeated. And the measures needed to realize greater economic freedom will be more important than ever.