4 Courses the Coronavirus Could Take 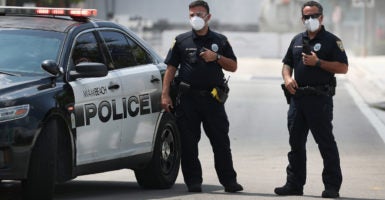 Miami Beach police officers are part of security as Florida Gov. Ron DeSantis and other officials hold a press conference Wednesday at the Miami Beach Convention Center on the Army Corps of Engineers' plan to convert the facility into a 450-bed field hospital. (Photo: Joe Raedle/Getty Images)

Since first emerging in China late last year, the novel coronavirus quickly has become a global crisis. The SARS-CoV-2 virus and COVID-19, the disease it causes, have spread rapidly across the world, infecting more than a million people and taking the lives of tens of thousands.

Along the way, the virus has slowed a majority of the world’s economies, including some of the largest.

At this point, it’s impossible to predict exactly how the coronavirus pandemic will evolve. After all, the virus gets a vote.

But based on historical patterns, comparisons to other outbreaks, and comments from experts, at least four paths seem possible and plausible.

In this scenario, the initial outbreak of COVID-19 is tamed in coming months. The new coronavirus largely disappears and no longer poses a significant threat, to the point that developing a vaccine becomes merely a formality. Americans return to work and school. Life returns to normal.

Although this is clearly the best-case scenario, it isn’t entirely without precedent. The SARS outbreak of 2002-2003 was largely a one-off event and lasted only six months. The virus has not posed a significant threat to public health since the initial outbreak.

Although public authorities were able to contain that outbreak to a little over 8,000 cases, the growing case counts of COVID-19 demonstrate that the new coronavirus is harder to control. Unfortunately, the odds of this outbreak being a singular event probably are not very good.

Spring has sprung and summer is on its way. Americans want to get outside and shake off coronavirus-induced cabin fever. If social—that is, physical—distancing restrictions are eased, lifted, or ignored too soon, there could be an incalculable resurgence of the virus—and the unpleasantness that goes along with it.

Perhaps the best example of this scenario involves the 1918-1919 Spanish flu pandemic. According to a 2007 study, lifting public health restrictions too early in some U.S. cities caused a resurgence in cases, resulting in a second wave of infections and disease.

This possibility calls for caution in the months ahead.

In this scenario, the United States overcomes the initial outbreak as warmer weather prevents the virus from spreading as effectively and efficiently. Unfortunately, despite the break in the rate of infection, the country sees a resurgence of cases in the fall as the virus settles into a seasonal pattern.

Many viruses follow a seasonal pattern. Seasonal influenza is a good example: Every year, a flu outbreak sweeps the United States from roughly November through March, infecting tens of millions of Americans—and taking many lives.

In the case of annual flu outbreaks, studies show the influenza virus survives longer at lower temperatures and lower humidity such as experienced in winter. The scientific jury is still out on seasonality for the new coronavirus.

In this scenario, the outbreak isn’t a unique event and isn’t strongly affected by changing weather patterns. Instead, the virus remains problematic for the foreseeable future.

Governments and scientists are left fighting new outbreaks throughout the country as they emerge year-round. Even with the development of therapeutics, a true resolution comes only when a vaccine is developed and mass produced.

This represents a worst-case scenario, but comments from experts suggest it isn’t out of the realm of possibility. Dr. Robert Redfield, director of the Centers for Disease Control and Prevention, noted in an interview that “this virus is going to be with us” until a vaccine is developed.

The Spanish flu pandemic of a little over a century ago is instructive here as well. Over the course of about a year, three successive waves of illness swept the world; in the Northern Hemisphere, outbreaks struck “in the spring-summer, summer-fall, and winter” before the virus disappeared.

As this range of potential paths demonstrates, the course of the COVID-19 pandemic remains shrouded in uncertainty. Indeed, additional trajectories for the coronavirus are certainly possible.

Policymakers must remain both cautious and flexible as they prepare to respond to any of these four scenarios, or to others that may arise. They must give careful consideration to planning and implementing the public health steps that will allow America to return to normal.