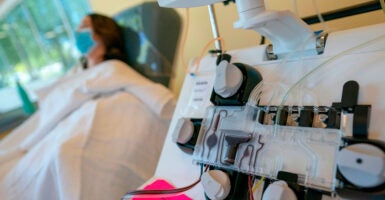 President Donald Trump announced on Sunday that the Food and Drug Administration has issued an emergency use authorization for convalescent plasma in the treatment of COVID-19.

Convalescent plasma is the fluid component of blood that is isolated from the donated blood of those who have contracted and recovered from COVID-19.

This fluid is rich with the antibodies that previous patients had produced to fight the virus and is transfused into current patients to aid their immune systems and help them to recover as well.

The announcement of the emergency use authorization came at the end of several months of convalescent plasma’s use in clinical trials and as part of an expanded access program, also known as “compassionate use.”

To date, more than 100,000 hospitalized COVID-19 patients have been treated with convalescent plasma as part of the expanded access program at the Mayo Clinic. The data from the program “shows promising efficacy,” according to FDA Commissioner Stephen Hahn, and it helped to justify the emergency authorization.

The study of this data, available as a preprint, included 35,322 patients who received a transfusion of convalescent plasma between April and July.

Comparing those who received transfusions before and after three days, mortality on Day Seven was 8.7% in the early group and 11.9% in the later group.

These are all extremely promising numbers, but do not yet prove definitively that convalescent plasma is an effective treatment.

With more than 35,000 patients involved, there is a tremendous amount of data that showed statistically significant improvements in those who received transfusions earlier with higher antibody titers.

This is certainly enough to justify an emergency use authorization—but still not that “gold standard” of medicine, which is the randomized, controlled trial.

As an example of potential confounding, those who were enrolled in the study later in its course were more likely to be treated concomitantly with remdesivir, which has been shown to decrease the time to recovery and may have affected the clinical outcome of patients in this study.

And getting to the bottom of that information might be difficult because more than 1,800 sites were involved in this study, each with different attending physicians treating their patients based on compassionate use, rather than on strict study protocols.

Still, the vast number of patients involved in this study helps to negate confounding factors and gave the FDA enough information to determine that convalescent plasma met the requirements to issue an emergency use authorization to it.

Prior to the emergency use authorization, patients could have access to convalescent plasma as part of a clinical trial or through the expanded access program.

An expanded access program treats the drug as an investigational drug and is intended to allow severely ill or near-dying patients to have access to the drug outside of a clinical trial setting.

In that setting, the focus is on the potential benefit of the drug, and safety may become a secondary concern. Using the drug as treatment requires approval by an institutional review board, which is a formal committee mostly concerned with biomedical research.

In contrast, now that convalescent plasma has an emergency use authorization, it can be used as part of the practice of medicine and outside of a research context. Normal consent is required, and there is no need for approval from an institutional review board. Furthermore, the emergency use authorization is only granted if the FDA thinks that a drug is safe relative to its potential benefits.

In short, as a result of this emergency use authorization, it will be much easier for more patients in more institutions to be treated with convalescent plasma, which is showing great promise.

But as always with COVID-19, optimism should be guarded. The trials are still underway that will show for certain whether convalescent plasma is effective or not.

While we wait for more information to come back from clinical trials, the large amount of existing data we have suggests that we may have another option in the fight against COVID-19.

This emergency use authorization now makes it easier for patients to have access to it.