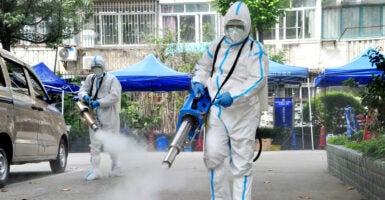 The political costs are not clear. Nothing political in China is. But China’s recent trade figures show China is already paying a real price for Chinese Communist Party General Secretary Xi Jinping’s authoritarian approach to managing the latest COVID-19 outbreak. How he deals with it going forward will have a major economic impact, not only on China, but on the world.

China’s latest official figure shows its export growth in April decelerated to 4% (year-on-year) from 24% in January. The growth rate of its imports in April declined even more significantly to -0.03% from 20% in January.

China’s trade profile is mostly a matter of importing raw materials, intermediate industrial goods, and machinery for manufacturing and final assembly. It then exports the final products to the world. Hence, the negative growth of imports in March (-0.12%) have already implied the waning exports in April. As the import growth remained sluggish in April, China’s exports in May are likely to remain lackluster.

The No. 1 culprit? Xi’s COVID-19-related lockdown of several Chinese cities since March.

The cities under lockdown included important industrial and trade hubs such as Shanghai and Shenzhen. The two cities combined accounted for over 20% of China’s total trade. Overall, cities under lockdown accounted for nearly one-quarter of the total population and over 40% of China’s economic output. So far, there is no sign of relaxing the COVID-19 restrictions after nearly two months of restraints.

The disruption to the supply chains is evidenced by China’s falling exports to and imports from Hong Kong and Vietnam in the first four months of the year.

Hong Kong is an important transit center for goods shipped from and to China. As Vietnam has been transforming into an important export platform, China’s exports of industrial goods to the country have been important for the final assembly in the country. The growth rate of China’s exports and imports in electrical machinery, the largest trade item, also shows a downgrading trend this year.

China’s trade prospect in the following months is less likely to be optimistic. Omicron is more contagious than the previous variants. The negative effect on trade would remain if the government continued to insist on the restriction of people’s movement.

Ironically, if the government relaxed the COVID-19 rules, the country would risk having more confirmed cases and potentially overwhelm its hospital system. The daily economic operation, external trade, and investment would be further and severely impacted as a result.

Another factor for China’s declining trade is the weak external demand. The economic growth in the two largest consumption markets, the U.S. and Europe, have lost speed this year.

Apart from the fading economic growth, the persistent inflation in the U.S. and Europe is likely to continue to curb the consumer spending, thus restraining goods imported from China.

Before the COVID-19 outbreak, China had already lost a strong engine for its trade expansion due to the deteriorating foreign direct investment in manufacturing since a decade ago. The wage hike and more strict labor and environment rules caused decline in foreign direct investment in manufacturing by over 50%, from $56 billion in 2011 to $37 billion in 2020, according to China’s Ministry of Commerce.

Manufacturing is diversifying away from China to other developing countries. As a result of decreasing foreign direct investment, foreign firms’ contribution to China’s overall trade decreased from nearly 60% in 2006 to 39% in 2020.

The impact from China’s continuous lockdown on the regional supply chain network could be significant. China has been the largest exporter and second-largest importer in the world since 2009. It is also a key supplier of industrial goods with middle to low technology intensity to developing countries in the region and an important producer and exporter for final consumption goods. The continuous lockdown of China’s cities would therefore impact the supply chain network in the region as well as exports of final goods to the world market.

Trade is also one of the key components in propelling China’s economic growth. The fewer confirmed cases were used to show China’s better management of COVID-19 outbreak, compared to many Western countries. However, in the face of the endless and highly transmissible variants, it is increasingly difficult to keep low the number of confirmed cases and death rates in China.

Add to this the demand side problem and  Xi’s zero-COVID-19 policy is unlikely to be sustainable.

China is being pulled in two directions. Political imperatives around the approaching Party Congress are encouraging Xi to stick to his draconian COVID-19 policy. Economic realities are pulling it toward adjustment. How China deals with this dilemma will have a major impact on the global economy going forward.