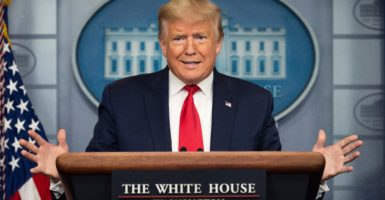 "I would say they are getting close to a deal. We’ll soon find out," President Donald Trump says Thursday evening of Russia and Saudi Arabia during the daily briefing on COVID-19 at the White House. (Photo: Jim Watson/AFP/Getty Images)

Trump said he had just had a 90-minute conversation with Russian President Vladimir Putin and Saudi King Salman bin Abdulaziz Al Saud about their oil price war, on the same day that the Organization of the Petroleum Exporting Countries met.

“We had a big talk as to oil production and OPEC and making it so that our industry does well and the oil industry does better than it’s doing right now,” Trump told reporters at the beginning of the daily White House briefing on the coronavirus pandemic.

“The numbers are so low, there will be layoffs all over the world,” Trump said of oil prices, adding:

There will be certainly layoffs in this country and we don’t want that to happen. We built a great, great energy business in the United States. So we have tens of thousands of jobs.

We had a very good talk. We’ll see what happens, but, as you know, OPEC met today. I would say they are getting close to a deal. We’ll soon find out.

Trump talked about the low demand for oil with far less driving during the stay-at-home culture of the COVID-19 pandemic. This leaves a massive amount of stored oil, he said.

“Our storage is now full,” the president said of the nation’s Strategic Petroleum Reserve. “It’s going to be pretty soon, our strategic national storage. I said this is a great time to fill it up, load it up with oil, that frankly is at pricing that nobody has ever seen before.”

The Trump administration appears to be planning for reopening much of the U.S. economy in May.

After some give and take, Trump answered that testing 325 million Americans is “not going to happen.” But, he said, testing is going well and has reached 2 million:

We have a great testing system. We have the best testing system in the world. But there are certain sections of the country that are in phenomenal shape already. Some sections are coming online. Others are going down and we in addition to that are giving away millions of tests; everyday exponentially, we’re picking it up. What we’ll be doing in the very near future is going to certain areas of the country and doing massive testing. It’s not necessary, but it would be a good thing to have.

Vice President Mike Pence, who heads the president’s coronavirus task force, later said that looking at the data county by county, “each day we are seeing stabilization.”

Pence named some of the most affected areas in New York, Louisiana, and Michigan.

Trump said the drugmaker Pfizer Inc. found a “promising new treatment that might prevent the virus from replicating” and hopes to begin testing in clinical trials “very soon.”

Trump noted that the Federal Reserve is providing up to $2.3 trillion in support to businesses and to state and local governments.

“Student loan payments have been waived for six months, and we’ll discuss it after that,” he said. “May go further.”