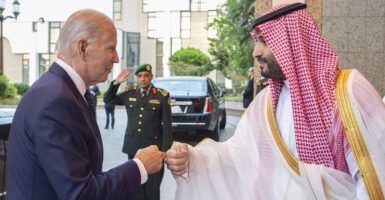 The Biden administration has approved the sale of Patriot missiles and support equipment to Saudi Arabia, overriding prior campaign pledges to end arms transfers to the “pariah” country over human rights issues.

President Joe Biden notified Congress of the $3 billion sale Tuesday, the day after a Saudi-led coalition in Yemen vowed to extend a U.N.-brokered cease-fire with the Houthi rebel group for two months, CNN reported.

Saudi Arabia has been accused of striking civilian targets and contributing to one of the world’s worst humanitarian crises, leading Biden in 2019 to denounce the country’s human rights practices and vow to suspend arms transfers that support offensive Saudi campaigns.

Biden previously promised to make Saudi Arabia “pay the price” for killing journalist Jamal Khashoggi and “make them the pariah that they are.”

Biden traveled to Saudi Arabia earlier in July in a reported attempt to persuade Saudi Arabia and other oil-rich countries to increase output as the administration deals with soaring energy prices and plummeting domestic approval ratings.

“This proposed sale will support the foreign policy goals and national security objectives of the United States by improving the security of a partner country that is a force for political stability and economic progress in the Gulf region,” the State Department told CNN.

A State Department spokesperson told the Daily Caller News Foundation that the purpose of the arms sales was to “strengthen” Gulf countries’ defensive capabilities “alongside engagement on human rights and civilian harm mitigation.” The spokesperson did not refer to any specific situations.

The State Department said the Patriot missiles would be used to protect Saudi Arabia’s southern border against aerial attacks from the Houthis, CNN reported.

“The United States is committed to advancing the security of our Gulf partners against serious external threats, and to supporting the defense of our partners’ territories, their citizens, and the thousands of U.S. citizens residing in the region,” the State Department spokesperson told the Daily Caller News Foundation.

Iran has enough enriched uranium to produce a nuclear weapon, and its support for terrorist groups, including the Houthis, presents a security concern for the region.

Biden announced creation of a regional defense network that allows participating countries to share information and install a web of missile defense systems to intercept possible Iranian attacks, during his July trip.

Although Biden hoped his July trip would bring the region, particularly Saudi Arabia, closer to Israel to balance against the Iranian threat, local states held back from declaring a formal alliance at a meeting of nine Arab leaders and Biden on July 16.

The Biden administration authorized one other arms sale to Saudi Arabia in November 2021 for $650 million, which the administration claimed would serve defensive purposes, CNN reported.

The State Department also approved a $2.2 billion sale of THAAD missiles to the United Arab Emirates on Tuesday, the outlet reported.