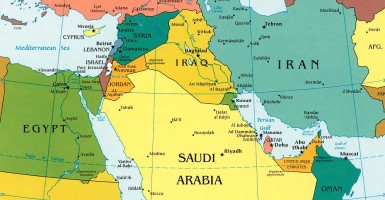 Trouble is, Saudi Arabia and Syria share no border.

The senior Obama administration official, who was not identified by name under well-established rules, was speaking about 6 p.m. on a conference call with reporters about ISIS, also known as ISIL or the Islamic State, when he made the geographic gaffe. He said:

ISIL has been, I think, a galvanizing threat around the Sunni partners in the region. They view it as an existential threat to them. Saudi Arabia has an extensive border with Syria … So what we have here is a galvanizing threat from ISIL that is, I think, leading our Sunni partners in the region to join us along the range of potential capabilities that my colleague mentioned.

>>>Commentary: What Obama Got Right—and Wrong—in His ISIS Speech

In fact,  Syria — home base for the brutal terrorist group — borders on five countries: Iraq, Jordan, Israel, Lebanon and Turkey.

Tom Anderson, director of the Government Integrity Project at the National Legal and Policy Center, originally spotted the “extensive” blunder.

Since then, the source’s disagreement with maps has been picked up by multiple news organizations, including the New York Times.

Always a bad sign when the White House plans a war on a country that it misplaces on a map http://t.co/aqVC9tiMiA

Steven Bucci, who knows his way around the region as a former Army Special Forces officer who now oversees foreign and defense policy at The Heritage Foundation, called the senior official’s comment “embarrassing” as the White House prepares for military action in the Middle East.

“It is not reassuring when the leaders of the Obama administration, on the day of a huge address by the president, make a gaffe this embarrassing,” Bucci said, adding:

There are not that many countries in the Middle East, and fewer as key to this crisis as Saudi Arabia. One thinks they might have bothered to look at a map, at least for a little while, to determine if [Saudi Arabia] really had any border with Syria.