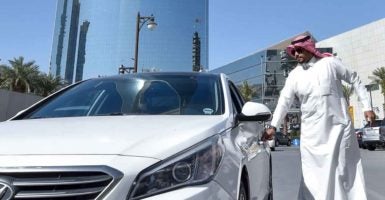 Before the COVID-19 pandemic, a Saudi driver for Uber begins his day Jan. 20 in the capital city of Riyadh, Saudi Arabia. The oil-rich nation's citizens increasingly have taken on what were considered low-status jobs as oil prices drop and the government trims subsidies during an economic downturn. (Photo: Fayez Nureldine /AFP/Getty Images)

As the world collectively battles with the coronavirus pandemic, leaders on the world stage also are grappling with how to address the oil price war between Saudi Arabia and Russia.

As prices plummeted, one idea floated is for the U.S. to form an alliance with Saudi Arabia to stabilize prices. Although it’s not clear what such a partnership would look like, government intervention in oil markets isn’t the solution.

Oil prices have fallen 60% since the beginning of the year. Fuel demand is down as factory and business owners temporarily closed their doors in the name of social distancing.

Jet fuel demand could drop by as much as 70% in the second quarter with travel restrictions in place and overall flight demand down significantly.

Meanwhile, Saudi Arabia and Russia are engaging in that oil price war. Earlier this month, Russia balked at the idea of cutting production, hoping to squeeze out U.S. producers and capture more of the global market share, even if it comes at a cost.

Saudi Arabia responded in kind by discounting its oil sales at unprecedented levels to retain market share and claiming it would increase production in the months ahead, though exports have not yet matched up with those stated intentions.

How long Russia and Saudi Arabia engage in this game of oil supply chicken is anyone’s guess, but it doesn’t appear to be a sustainable strategy.

Although both countries have ample cash reserves, petroleum revenues are important for their budgets. So there could be a revision of strategy sooner rather than later. Regardless, members of Congress and senior officials in the Trump administration have urged Saudi Arabia to curtail production, and did so again at the recent G-20 meeting.

One troubling idea mentioned by Department of Energy officials is to have Saudi Arabia leave OPEC and form an alliance with the U.S. instead. Details of what such an alliance would look like aren’t clear, but it likely would mean more government intervention in oil markets.

According to The Wall Street Journal, one Trump administration official mentioned that a partnership wouldn’t actually dictate U.S. oil production levels and targets, as OPEC does. However, the government “would more actively use national reserves and economic stimulus to blunt price spikes and dips.”

With regard to price spikes, the government has a lousy history of using national reserves to counterbalance supply disruptions. The Department of Energy manages the Strategic Petroleum Reserve, which has the capacity for 727 million barrels of crude oil. The reality, however, is that the Strategic Petroleum Reserve is an ineffective mechanism to balance supply and demand.

One problem for optimal use of the Strategic Petroleum Reserve is the federal government’s inability to predict future events and, consequently, having a slow or late response.

If concerns exist, for instance, that a conflict overseas will exacerbate supply disruption, the government may hold on to the oil reserves. If the conflict does not worsen, the expediency that the strategic reserve needs to be at least temporarily effective is lost.

Historical uses of the strategic reserve in times of unanticipated supply shocks proves this to be true.

As University of Wyoming economist Timothy Considine explains, “a more fundamental problem arises from vesting a political entity with the inherently complex task of allocating oil across time and space—a task that is probably best left to market forces.”

Since a diverse mix of countries produces oil for the global market, private inventories can provide market buffers against supply shocks.  Oil companies respond to prices and market scenarios by building up inventories and unloading them. The private sector will respond to price signals more efficiently without the government acting as a player.

Nor should the government provide an economic stimulus during oil price dips. Doing so would be nothing short of a bailout. The fact of low oil prices in and of itself isn’t a reason for the taxpayers to help.

A case may be made to help those energy companies and their employees (as part of all companies) where the pandemic is having an immediate adverse effect on their ability to operate. But that’s not an excuse to implement a system that bails out the industry every time oil prices plummet.

Not only would government intervention put taxpayers on the hook for future potential losses and bankruptcies, it would distort the risk-taking process that is critical for investment. As with similar government-backed loans, there’s a good chance the government either is going to subsidize an economic loser or give preferential treatment to a company that doesn’t need it.

But the circumstances also will drive innovation, efficiencies, and lower operating costs. We’ve seen the resiliency in the industry before and we’ll see it again.

However, no matter whether financial successes or tribulations come the industry’s way, more government meddling would do much more harm than good.