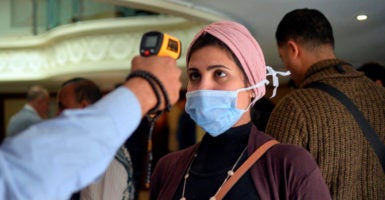 In Egypt, the lack of transparency from the government prevents health officials from understanding the full picture of the virus. Pictured: A woman has her body temperature measured at on a tourist river boat in Egypt's southern city of Luxor on March 8, 2020, amidst efforts to detect possible COVID-19 coronavirus cases. (Photo: AFP/Getty Images)

As the coronavirus continues to affect daily life around the world, one region that should be of particular concern for the United States is the Middle East.

Even before the COVID-19 crisis, economic fragility, varying levels of stability, and civil wars have weakened the region’s ability to effectively deal with a mass outbreak.

While there is a stark divide in terms of resources between oil-rich Persian Gulf countries and their poorer neighbors in the Levant, the COVID-19 pandemic will have massive repercussions for the entire region, affecting their economies and possibly shaking political systems in the aftermath of the crisis.

The degree of the fallout will depend largely on the responses of each government to mitigate the effects of the virus.

A week after Iran reported its first cases of coronavirus on Feb. 19, nearby countries claimed that more than 140 people were already infected—most, if not all, of them linked to cases in Iran. By March 11,  the virus had spread to 18 countries in the Middle East and North Africa.

Since then, it’s been difficult for international health organizations to understand the size and scope of the virus in the region.

The World Health Organization claims that information is being “insufficiently communicated” about coronavirus cases in the Middle East, leading to an “uneven” approach in fighting the virus regionally.

Inaccurate information can be attributed to media censorship in most countries, which want to appear able to deal with the virus and effective in doing so.

Egypt and Iran have been of particular focus for journalists, who have accused the governments of actively suppressing information about the virus from the public.

Iran has failed to take responsibility for its mismanagement of the virus, using conspiracy theories and artificial numbers to take control of the virus narrative in the region.

In Egypt, the lack of transparency from the government prevents health officials from understanding the full picture of the virus. Foreign reporters have been threatened or asked to leave the country, and news websites have been taken down over tweets and articles claiming that the government has been covering up the true extent of the outbreak.

Leaked medical sources and discussions with high-ranking military leaders stated that public rates are being kept artificially low by classifying COVID-19 deaths as pneumonia or other respiratory illnesses.

Regardless, it seems unlikely that only 865 people have been infected in Egypt, considering that Cairo is the most densely populated city in the Middle East, with 20 million people in an area of about 600 square miles.

As the number of cases continued to climb, the government finally closed schools, mosques, and tourist sites, although no lockdown has been announced.

Lack of access also poses a problem in reporting COVID-19 cases in Yemen and Syria. Civil wars have weakened infrastructure and divided governments, making it difficult to test for the virus and care for the infected.

In Syria, there are more than 6 million internally displaced people living in overcrowded refugee camps. These camps are a perfect place for a virus to flourish, with tightly packed communities that lack appropriate health and sanitation services.

Masks, ventilators, and protective gear needed to care for COVID-19 patients have been hard to come by as supply chains have been disrupted, and functioning hospitals in areas not controlled by the regime are limited in their capacity.

Opposition-held northwestern Syria could be greatly affected by the virus. Close to 4 million people live in camps that are already struggling with an outbreak of the H1N1 flu. Testing kits and medical supplies have been sent to Idlib, but facilities and medical professionals are few and far between.

The Assad regime has so far only reported a few cases, though its regular interactions with both Iran and China makes it likely that the extent of the outbreak is much worse.

Though the overall regional impact of the virus is hard to discern for the reasons noted above, certain countries took early action, imposing strict measures to curtail the effects of the virus.

Jordan, a country that hosts a large percentage of refugees, took the most aggressive approach to limit the impact of the virus.

Within the first days of reported cases, emergency laws were implemented. Borders were shut, flights were canceled, and Jordanians returning from abroad were placed in a mandatory 14-day quarantine at the airport.

A nationwide lockdown and total curfew followed on March 20 as virus cases slowly grew, enforced by military personnel and police patrolling the streets.

The fines, jail terms, and car impounds deterred most violators, though the kingdom later eased restrictions to allow for a period of movement after street fights broke out over bread.

Despite these harsh restrictions, a recent poll by the Strategic Studies Center found that 74% of Jordanians approve of the measures taken by the government, in large part because the measures have been successful in containing the spread of the virus.

Iraq took a similar approach, though divided areas of control have led to various levels of compliance.

Despite a nationwide curfew issued March 17 by the Iraqi government, 400,000 Shiite pilgrims turned out in Baghdad and other cities in the south of the country on March 22 to commemorate the death of a revered Muslim imam, Musa al-Kadhim.

Even so, Iraqi authorities have instructed medical staff not to speak with the media, so it’s difficult to know the true scale of the outbreak there.

Restrictions in Persian Gulf countries such as the United Arab Emirates, Bahrain, and Saudi Arabia have now escalated to match stricter measures imposed by other countries in the region. Those new measures include mandatory lockdowns and curfews.

While health systems in these countries are better equipped to handle coronavirus cases than other underresourced countries in the Levant, the virus has caused significant shocks in Gulf Cooperation Council countries that export oil.

The drop in demand and the absence of a new production agreement among OPEC members have caused oil prices to plummet by 50% since the start of the crisis.

Instead of joining forces to weather the effects of the crisis, governments in the region are using the spread of the coronavirus to stoke Sunni-Shiite tensions and inflame political conflicts like the Gulf Cooperation Council rift online.

The Arabic hashtag  “Qatar is corona” has been circulating on social media in Saudi Arabia and the UAE, placing blame on Qatar for creating the virus. The twitter hashtag references the Gulf Cooperation Council’s dispute with Qatar that dates back to June 2017, when the kingdom of Saudi Arabia, the UAE, Bahrain, Egypt, and several other Muslim-majority countries cut or downgraded diplomatic ties with Qatar after Doha was accused of supporting terrorism in the region.

Others in the region blame “Shia backwardness,” likely referencing the licking of religious shrines, as the reason the virus spread so quickly in Iran.

Iran, in turn, has utilized conspiracy theories to place blame on the U.S. for its own mistakes, a move that exposes the regime’s agenda to demonize traditional enemies instead of prioritizing the safety and health of its citizens.

Placing blame on existing rivals is not the answer. The region needs to put aside its differences and come together to create a regional strategy to fight the virus and to mitigate its effects post-pandemic.