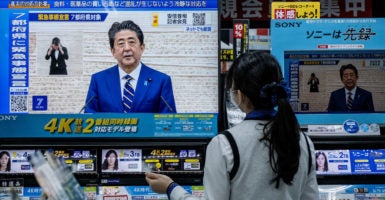 A woman watches a TV as Japanese Prime Minister Shinzo Abe speaks at a press conference. Abe has declared that Japan is in a state of emergency. (Photo: Viola Kam/SOPA Images /LightRocket/Getty Images)

There has been far less international focus on Japan’s low-key response to COVID-19 than on South Korea’s extensive testing program.

The latter strategy is now extolled as an international model for bending the curve, but with few early cases in Japan, media reports questioned how the country had done so well with such little effort.

Some speculated that cultural factors such as widespread use of masks in winter and the Japanese bow when greeting, versus the U.S. handshake and hug, contributed. But as case totals have begun to climb, the central government’s minimalist actions are now drawing greater criticism.

With the outbreak of COVID-19, the disease caused by the new coronavirus, Tokyo adopted a less energetic approach to testing and closures than South Korea.

Japan initially sought to quickly identify clusters of new cases and then impose containment measures to prevent a larger outbreak.

The government closed schools and some entertainment events, but it did not mandate closure of restaurants or bars, nor impose quarantines or strict travel restrictions. Travelers to Japan were asked only to voluntarily self-isolate for 14 days.

With fewer restrictions in place, life in Japan appeared more normal and unaffected than in South Korea.

Yet some warned that the low case numbers in Japan were because it tested only those with strong symptoms for four days or direct contact with those who had tested positive.

The limited testing program resulted in low numbers of identified COVID-19 cases, which in turn led to public complacency and poor adherence to personal health and social distancing measures.

Many restaurants, bars, and stores remain open and crowded, and subway trains continue to be packed with commuters. Only 30% of Japan practiced safe social distancing practices and only 5% are teleworking, according to a survey conducted by the Ministry of Health.

As case numbers rose, Japan belatedly imposed the stronger measures imposed by other countries. It increased health screenings at airports and banned travelers from 70 countries, including the U.S. and most of Europe.

Last Friday, the U.S. Embassy in Tokyo issued a health alert because of the rising number of COVID-19 cases in Japan. The embassy directed U.S. citizens who wish to return to the United States to do so immediately lest they be stranded overseas indefinitely.

The embassy warned that “the Japanese Government’s decision to not test broadly makes it difficult to accurately assess the COVID-19 prevalence rate” and raised questions over how well the Japanese health care system will function in coming weeks.

The directive, in force at least until May 5, applies to major U.S. installations, including Yokosuka Naval Base, Yokota Air Base, Naval Air Facility Atsugi; Camp Zama, home of U.S. Army Japan; and the Marine Corps’ Camp Fuji training area.

After resisting weeks of pressure from officials and legislators for firmer action, Japanese Prime Minister Abe on Monday declared a state of emergency for Tokyo and six other prefectures, as well as announced a $1 trillion economic stimulus package.

Abe had been reluctant to issue the edict to avoid further damage to a national economy already reeling from business closures and the cancellation of the 2020 Tokyo Summer Olympics.

The directive will last at least a month but does not impose a lockdown. Instead, the measures include a stay-at-home request with no penalties for violations.

Tokyo Gov. Yuriko Koike said the city will start transferring patients with no symptoms or mild ones from hospitals to hotels and other accommodations to make room for an influx of patients with severe symptoms.

The Tokyo Medical Association declared a state of medical emergency Sunday because of concern about a possible collapse of the health care system brought on by the spike in new patients.

The Japanese government reacted haltingly and ineffectively to major crises such as the Kobe earthquake in 1995 and the 3/11 triple disaster in 2011 of earthquake, tsunami, and nuclear reactor meltdown.

Although so far COVID-19 in Japan does not match those disasters in magnitude, the Abe administration’s slow and indecisive response does not bode well for future Japanese government responses to fast-breaking natural disasters.