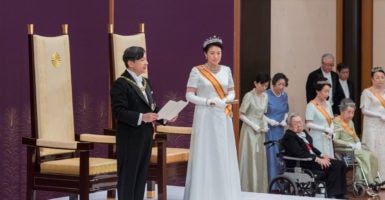 Emperor Naruhito delivers his first speech after ascending the throne during the enthronement ceremony at the Imperial Palace on May 1, 2019, in Tokyo. (Photo: Handout/Getty Images)

May 1 marks an important day in Japan’s history. On Wednesday, Japanese Emperor Akihito will abdicate the throne and cede it to his son, Crown Prince Naruhito.

While the event is largely symbolic, it will usher in a new era for Japan.

Japan, like most other countries in the world, uses the same Gregorian calendar as the United States. But Japan also uses a second calendar that aligns with the years of each new emperor. Akihito ruled during what’s known in Japan as the Heisei (pronounced “hey-say”) period, meaning “achieving peace,” from 1989 to the present.

Naruhito will be crowned the new emperor and take over from May 1. He will rule over what will be known as the Reiwa (pronounced “ray-wha”) period, meaning “beautiful harmony.”

While Japan is a democracy, as in the United Kingdom, its royal family still plays an important role as a symbol of Japanese identity.

The emperor is the symbol of the state of Japan with his powers limited by the Japanese Constitution. The emperor appoints a prime minister that’s been designated by the legislative body. The prime minister—currently, Shinzo Abe, who has been in office since 2012—heads the Cabinet, which holds executive power. Laws and constitutional reform all go through the legislature of Japan, known as the Diet.

Looking back over the past 31 years of U.S.-Japanese relations, there have been a significant number of events.

Akihito took over from his father, and the Heisei period began near the end of Ronald Reagan’s administration in January 1989. Since then, both the U.S. and Japan have experienced demographic changes, natural disasters, terrorist attacks, economic booms and busts, political swings, technology disruption, and more.

Out of these events, the relationship with Japan has now become possibly the best alliance the U.S. has in the Asia-Pacific. The U.S.-Japanese economic relationship is as mature as those the U.S. has with Canada or the United Kingdom.

Trump will be visiting Japan in late May and will become the first foreign leader to visit with new Emperor Naruhito.

In the coming months, there will be a lot of opportunity for the U.S.-Japan relationship to either freeze or flourish.

The U.S. and Japan are currently negotiating a bilateral trade agreement. That has been a plan of the Trump administration since withdrawing from the Trans-Pacific Partnership, which was primarily led by Japan after the U.S. withdrawal.

But those bilateral negotiations could end up stalling if the administration decides to pursue tariffs on auto imports, including those from Japan.

Later this summer, Japan is hosting the Group of 20 summit, a forum for 20 of the world’s economic leaders. Abe will be looking for opportunities to partner with the U.S. and other like-minded countries to help develop standards for the future of electronic commerce and cybersecurity.

No one knows for sure what’s in store for either the U.S. or Japan 15 or 30 years from now. At least for the rest of this year, however, there’s the potential for the U.S.-Japan relationship to grow in a meaningful way.