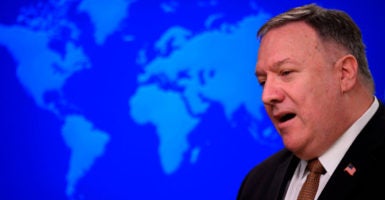 Secretary of State Mike Pompeo, pictured at the State Department on March 25, recently spoke of the disinformation campaigns fomented by China, Russia, and Iran about the origins of the coronavirus. (Photo: Andrew Caballero-Reynolds/AFP/Getty Images)

Secretary of State Mike Pompeo has gone on the offensive to correct misapprehensions about American and Chinese leadership in the coronavirus crisis. China has ramped up a global propaganda battle, hoping to move into the leadership position.

Yet, as a country that was the origin of the coronavirus, the cause of the global crisis, and the owner of a reputation for unscrupulous authoritarian leadership, China is hardly in a position to claim this mantle. It unequivocally belongs to the United States, even as we are dealing with the health crisis at home.

In a recent interview with Asian reporters, Pompeo spoke of the disinformation campaigns fomented by China, Russia, and Iran about the origins of the coronavirus, and he stressed the commitment of the United States to its friends and to the international community.

“The narratives are different, but each of them has the same component, which is to avoid responsibility and try and place confusion in the world—confusion about where the virus began but also confusion about how countries are responding to it and which countries are actually providing assistance throughout the world. And we think it’s important that those narratives are corrected.”

The State Department, which stays in weekly contact with countries throughout the Indo-Pacific region, last week announced $274 million in assistance that will go across 64 priority countries, including Bangladesh, Burma, Cambodia, India, and Kazakhstan. The United States is the largest partner in helping those countries address this crisis.

In fact, the United States was one of the first countries to offer assistance to China as well, offering help for Wuhan within days of the outbreak there through multilateral organizations, including the World Health Organization.

The United States spends many times what China does on international organizations.

According to Pompeo, “We are by far the largest contributors to organizations like the U.N. Children’s Fund and the World Food Program because we believe in effective multilateralism that is focused on helping those in need, not scoring political points. This is what true global leadership looks like.”

In 2019, the United States contributed more than $400 million to the World Health Organization, the U.N. agency in charge of coordinating the coronavirus response. China, the world’s second-largest economy, contributed $44 million.

UNICEF was one of the first organizations to provide aid to the Chinese people during the COVID-19 pandemic. On Jan. 29, it delivered six metric tons of respiratory masks and protective suits for health workers to Shanghai, for distribution in Wuhan.

In 2019, the United States contributed nearly $1.7 billion to the United Nations High Commissioner on Refugees, which aids millions of refugees of war and disease around the world. China contributed $1.9 million.

In 2019, the United States provided 42% of the World Food Program’s $8 billion in resources, which was four times the contribution of the next leading member state donor. China provided $30 million.

The World Food Program has sent more than 85 shipments to 74 countries to assist in COVID-19 responses and persists in its aim to reach 86 million hungry people this year.

In his highly relevant new book “The Return of Great Power Rivalry: Democracy Versus Autocracy from the Ancient World to the U.S. and China,” Matthew Kroenig writes:

Social scientists have examined whether democracies are better at discrete tasks: economic growth, alliance building, and military effectiveness. And the repeated finding is that democracies do better.

Democracies also do better at the transparency and innovation needed to combat disease.

Undoubtedly, the autocratic government of China would like to take advantage of the global health crisis it has created. Yet, history suggests the democratic United States will weather the storm, go the distance, and remain the global leader.