Trump Clears Way to Use Malaria Drug Against COVID-19 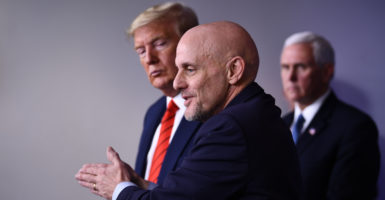 In what he called a “game-changer or maybe not,” President Donald Trump on Thursday directed the Food and Drug Administration to clear regulatory hurdles and move toward expanding use of a malaria drug to battle the coronavirus.

The drug chloroquine has shown “very, very encouraging early results,” Trump said during the daily press conference on the coronavirus disease, which health officials call COVID-19. The drug has been used to treat malaria since 1944.

“If treatments … in Europe, Japan, or other nations are known to be safe against the virus, we’ll use that information to protect the health and safety of the American people,” Trump said, later adding:

This is a common malaria drug. It’s also a drug used for strong arthritis. If somebody has pretty serious arthritis, [he] also uses this in a somewhat different form. But it is known as a malaria drug. It has been around for a long time, and it’s very powerful.

The nice part is it has been around for a long time. So we know if things don’t go as planned, it’s not going to kill anybody. When you go with a brand new drug, you don’t know. You have to see and you have to get a long test. But this has been used in different forms, a very powerful drug, and it has shown very encouraging, very, very encouraging, early results. And we’re going to be able to make that drug available almost immediately.

That’s where the FDA is so great. They’ve gone through the approval process. It has been approved, and they took it down [in availability] from many, many months to immediate. So, we are going to be able to make that drug available.

As of noon Thursday, there were 10,442 confirmed cases of COVID-19 in the United States and 150 deaths, according to the Centers for Disease Control and Prevention. That’s up from 97 deaths reported on the site the day before.

FDA Commissioner Stephen Hahn said his agency is providing American innovators “regulatory flexibility with scientific oversight” to expedite development of other safe drugs that could be a bridge until a vaccine for COVID-19 is fully developed.

Hahn, a physician, noted that phase one of vaccine trials are happening.

“We expect that to take 12 months to get to completion, to get to a time when we can actually approve a vaccine. These are all things to bridge to the prevention part of this with the vaccine,” Hahn said of medicines. “It’s exciting work, and the president is right. This is record-breaking time for the development of a vaccine and impressive public-private partnership.”

Hahn said the FDA will continue to explore whether “experimental or an off-the-shelf drug that is used for something else can safely and effectively treat patients” infected with the coronavirus.