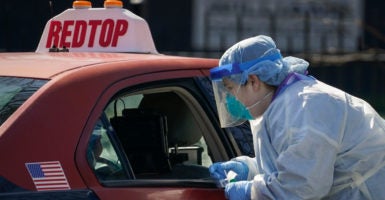 A medical professional from Children's National Hospital administers a coronavirus test to a child in a taxi cab at a drive-thru testing site for children age 22 and under at Trinity University on April 2, 2020 in Washington, D.C. (Photo: Drew Angerer/Getty Images)

Scientists are working furiously to find a drug to treat the COVID-19 coronavirus. (See here, here, and here.)  Currently, there’s no medical consensus as to what drug (if any) is best for patients.  The result is that senior government officials, including governors, have started to get involved in the matter.

They are acting under tremendous pressure and time constraints, so what they have written to explain their orders could be more precise.  Some media outlets have done stories describing what government is doing, and those reports could stand some improvement, too.

Here’s the problem:  There’s no known cure for COVID-19. (See here and here.)  There’s hope that the anti-malarial drugs hydroxychloroquine or chloroquine, when used in combination with the antibiotic azithromycin, are reasonable treatments for COVID-19.

Two preliminary studies in France attest to their potential efficacy when one or the other is used as adjunctive therapy along with azithromycin.  (See here and here.)  Media are reporting that physicians in Italy and France are prescribing hydroxychloroquine for COVID-19 patients.

In this country, the Department of Health and Human Services (HHS) has accepted donations of hydroxychloroquine and chloroquine from pharmaceutical companies to the National Emergency Stockpile  to increase the supply of the drugs for distribution to affected areas.

Health and Human Services is also funding clinical studies of their effectiveness against COVID-19. Exercising its power under the Federal Food, Drug and Cosmetic Act, the Food and Drug Administration (FDA) has also issued an order finding that an emergency exists authorizing the distribution of hydroxychloroquine or chloroquine from the National Emergency Stockpile so that physicians have quantities available to prescribe them for their COVID-19 patients.

He later added, “if chloroquine or hydroxychloroquine works—or any of the other things that they’re looking at that are not quite as far out—but if they work, your numbers are going to come down very rapidly. So, we’ll see what happens. But there’s a real chance that they might, they might work.”

FDA Commissioner Stephen Hahn remarked that the agency would consider chloroquine “in the setting of a clinical trial—a large, pragmatic clinical trial—to actually gather that information and answer the question that needs to be … asked and answered.”

Trump then added that “I agree with the doctor, what he said,” and that the drug may or may not work, but “I feel good about it,” and “we will see soon enough,” and, because it isn’t a dangerous drug, since physicians have prescribed it for more than 20 years, we should try it.

Fauci later said that there “really isn’t that much difference” between what he and the president were saying. The difference, he said, was between “hoping” that hydroxychloroquine will work and “proving” that it will.  “I don’t see big differences here,” he said.

Prescribing hydroxychloroquine or chloroquine without further proof of efficacy for treating COVID-19 or with the intent to stockpile the drug may create a shortage for patients with lupus, rheumatoid arthritis, or other ailments for which chloroquine and hydroxychloroquine are proven treatments. Reports of this conduct will be evaluated and may be further investigated for administrative action. Prescribing any kind of prescription must also be associated with medical documentation showing proof of the medical necessity and medical condition for which the patient is being treated. Again, these are drugs that have not been proven scientifically or medically to treat COVID-19.”

The letter could be read to say that prescribing those drugs for that treatment might land physicians in hot water. Whether that interpretation is a correct one hinges on whether use of the word “or” in the phrase “without further proof of efficacy for treating COVID-19 or with the intent to stockpile the drug” was intentional or was a stray word mistakenly inserted and not later removed only because of the time pressure that the drafters had to cope with.

The issue is now likely moot if media reports are true that Whitmer has asked Trump for supplies of the drug.

What lessons should we draw from all of this?

First, state agencies appear to have a legitimate worry that people who stockpile a drug known to treat other diseases can wind up injuring patients who need and use that drug regularly if they can’t get it.  Needless stockpiling of drugs that patients take for non-COVID-19 diseases will harm them, and we should avoid that prospect.  That is likely what the Nevada and Michigan officials were trying to address, rather than to interdict the use of hydroxychloroquine and chloroquine in particular cases.

Second, it would be helpful if government officials were precise when drafting executive orders for implementation by treating physicians, who are not lawyers and who have their hands quite full right now.  But time is critical for everyone fighting COVID-19, so government officials may not have been as precise as they should have been.  They need to be particularly careful here, because misinterpretations can lead to mistakes and cause needless anxiety—if not outright panic—at a time when we can afford neither.

Third, it never makes sense for politicians to talk about a subject beyond their expertise, especially ones of a medical nature.  Most politicians have a knowledge base that is a mile wide and an inch deep—at best. As that great Western philosopher “Dirty Harry” Callahan taught us: “A man’s got to know his limitations.” When politicians go beyond that, they risk looking foolish.

Then-New York Mayor Rudy Giuliani did a masterful job in his post-9/11 press conferences in that regard.  He opened them by summarizing what New York City was doing in the aftermath of the attack on the Twin Towers.  He then turned the lectern over to the experts who could answer questions about the details.

Fourth, the media need to be particularly careful when describing what government officials have ordered.  While they also operate under deadlines, details and nuances matter, and they need to spend the time to get it right. That is especially so now, since most Americans are housebound and relying on the media to help guide us through these difficult times.