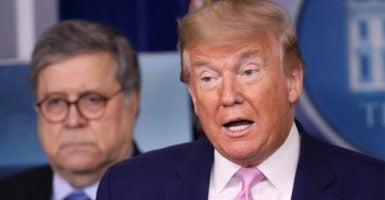 President Donald Trump said it’s difficult to know what the real number of COVID-19 cases in China is, but stressed the U.S. has a strong relationship with the country where the pandemic originated.

“Their numbers seemed to be a little bit on the light side—I’m being nice when I say that—relative to what we witnessed and what was reported,” Trump said of the Chinese during the White House press briefing Wednesday evening on efforts to curb the coronavirus that causes the disease.

“As to whether or not their numbers are accurate,” the president said, ” I’m not an accountant from China.”

China has reported having about 82,000 COVID-19 cases and fewer than 3,500 deaths. However, recent news reporting based on social media from China and photos indicates that more than 40,000 died from the coronavirus in the region around Wuhan, the city where the virus originated.

In the U.S., the coronavirus had infected at least 211,413 and killed 4,713 as of Wednesday evening, LiveScience reported.

A Chinese Foreign Ministry official, Zhao Lijian, suggested in mid-March that the U.S. Army planted the virus in Wuhan.

“We didn’t like the fact that they said it came from our soldiers, and they haven’t pursued that,” Trump said. “That was a mid-level person that said that. That was not a high-level person. So I will always assume the best. I will assume the high-level people didn’t know about. It was a foolish statement. The relationship with China is a good one.”

“We would like to have a great relationship with China. Unfortunately, we are just not in a position to confirm any of the numbers that are coming out of China,” he said. “There is no way to confirm any of those numbers. There is a lot of public reporting on whether the numbers are too low. You’ve got access to those reports that are coming out of Chinese social media.”

Trump also announced the launch of enhanced counternarcotic operations in the Western Hemisphere. The Navy and and Coast Guard are involved.

Defense Secretary Mark Esper said the operations are happening in the Eastern Pacific Ocean and the Caribbean Sea.

“The counternarcotic operations that are now underway will further disrupt the flow of illicit drugs to America, deny our adversaries the financial resources they depend on, and build the capacity of our partner nations throughout the region,” Esper said.

“This is a particularly important time for this operation to begin,” he added. “As nations around the world shift their focus inward to deal with the coronavirus pandemic, many criminal organizations are attempting to capitalize on this crisis. The enhanced operations we are announcing today will keep the pressure on these criminal groups and protect the American people from the devastation caused by the flow of illegal drugs into our country.”

“The destroyed families, the destroyed lives, the draining of our national treasure, state budgets are crushed by the burden that this narcotic trafficking causes,” Barr said. “The president has made clear that we are in this fight against the cartels to win, and that we are not interested in half measures.”