At Least 6 States Close Down All Public Schools 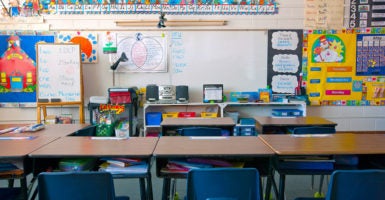 Officials in Oregon, Ohio, Michigan, Maryland, Kentucky, and New Mexico declared this week that schools in their states will be closed. (Photo: Mint Images/Getty Images)

Public schools across the country have begun to close over the coronavirus pandemic, with some states outright declaring that all public schools are closed.

Officials in Oregon, Ohio, Michigan, Maryland, Kentucky, and New Mexico declared this week that schools in their states will be closed, while some public schools in Washington state, Virginia, and Connecticut also temporarily closed down.

Maryland officials announced Thursday at a news conference that all public schools would be closed beginning next week and through March 27.

State Schools Superintendent: Mon through Friday next week, all schools will be closed in the state of Maryland @wjz #BREAKING

Ohio Gov. Mike DeWine ordered Thursday at a press conference that all Ohio public schools, including public, private, and charter schools, would be closed for three weeks beginning Tuesday, March 17.

New Haven, Connecticut, public schools closed indefinitely due to concerns over the pandemic, and Washington Gov. Jay Inslee ordered that schools in Seattle close for a minimum of two weeks.

Meanwhile, New York school chancellor Richard A. Carranza has said that school closings will only come as a last resort, and the Los Angeles superintendent announced Thursday that schools would remain open—despite demands from teachers unions that Los Angeles schools close down.