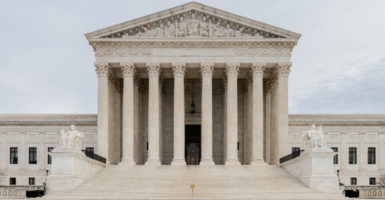 The nation’s highest court on Wednesday ruled that the White House’s "Remain in Mexico" program, also known as Migrant Protection Protocols, can remain effective for the entire southern border while a legal challenge continues on. (Photo: Getty Images)

The Supreme Court delivered a win for the Trump administration’s immigration agenda, blocking a federal court injunction that would have limited a program that requires asylum-seekers to wait in Mexico.

The nation’s highest court on Wednesday ruled that the White House’s “Remain in Mexico” program, also known as Migrant Protection Protocols, can remain effective for the entire southern border while a legal challenge continues on. The decision allows the administration to continue fully implementing an initiative that, it contends, has monumentally helped control the border crisis.

The 9th U.S. Circuit Court of Appeals earlier in March declared that it would block the Migrant Protection Protocols in Arizona and California—two states within its jurisdiction—on March 12 unless the Supreme Court weighed in.

The Supreme Court justices did intervene with just one day left, granting the administration’s application for a stay.

“We are gratified that the Supreme Court granted a stay, which prevents a district court injunction from impairing the security of our borders and the integrity of our immigration system,” a Department of Justice spokesperson said Wednesday.

“The Migrant Protection Protocols, implemented pursuant to express authority granted by Congress decades ago, have been critical to restoring the government’s ability to manage the Southwest border and to work cooperatively with the Mexican government to address illegal immigration,” the spokesperson continued.

Remain in Mexico, which was launched in January 2019, has become President Donald Trump’s most effective tool at controlling the U.S immigration crisis. The program requires most non-Mexican nationals who claim asylum at the U.S. southern border to wait in Mexico for the entirety of their court proceedings.

Since its inception, Migrant Protection Protocols has sent around 60,000 asylum-seekers across the border to wait in Mexico, mostly eliminating the possibility for them to be released into the interior of the U.S.

The decision on Wednesday marks the latest back-and-forth between the 9th Circuit Court of Appeals and the Supreme Court.

The 9th Circuit Court of Appeals—which has proven hostile to Trump’s immigration agenda—blocked the Remain in Mexico program for the entire southern border in February. However, the court immediately suspended that order after the Trump administration filed an emergency motion requesting a stay.

The appeals court then declared this month it would block it in Arizona and California, but the nation’s highest court—once again—put a stop to that order Wednesday.

However, the legality of the program itself has not been ruled on by the Supreme Court. The order on Wednesday simply allows it to remain in place as the legal challenge against it runs through the court system.

Content created by The Daily Caller News Foundation is available without charge to any eligible news publisher that can provide a large audience. For licensing opportunities of their original content, email  licensing@dailycallernewsfoundation.org.