Yes, Border Patrol Arrests Are Down, but Our Immigration Policies Still Need Work 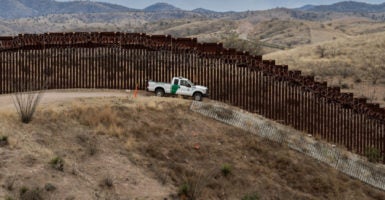 A Border Patrol officer sits inside his car as he guards the US-Mexico border fence, in Nogales, Arizona, on Feb. 9, 2019. (Photo: Ariana Drehsler/ AFP/Getty Images)

The last few months have seen a significant decline in Border Patrol arrests thanks in part to attempts by the Trump administration to deter and discourage illegal immigration. But serious problems remain unsolved and more remains to be done.

Following the inauguration of President Trump, illegal entries into the U.S. fell sharply, partially as a result of new policies to combat illegal immigration, but also because there was a widespread perception that Trump would be able to completely stop illegal immigration.

However, loopholes and weaknesses in U.S. immigration laws remained. For example, a 2016 decision by the 9th Circuit court reinterpreted a 1997 court settlement to rule that when adults enter the country illegally, any child accompanying them must be released from immigration agencies’ custody within 20 days.

The U.S. asylum system is also easy to game. Many who enter illegally are able to pass the initial “credible fear” hearing and get released into the U.S. – but very few end up being granted asylum.

With an easy-to-game asylum process and loopholes for bringing children to the border, the U.S.’s ability to manage its border and adjudicate claims was being overwhelmed.

The Trump administration tried to plug these weaknesses through policies such as zero tolerance (also known as family separation), but these solutions were far from ideal and received widespread pushback. The administration ended them and began releasing anyone caught with a child. And so it became clear that because of the loopholes, bringing a child to the southern border was the golden ticket into the U.S. for illegal immigrants.

The result was that the number of family units (adults with children) and unaccompanied children coming to the border spiked. In May, the U.S. reached a high of more than 140,000 individuals who were caught crossing illegally or turned back at legal ports of entry. That was up from around 52,000 in May 2018 and just 20,000 in May 2017.

Importantly, 70 percent are now family units or unaccompanied children, versus 40 percent in 2018 and just over 20 percent in 2017, according to Customs and Border Protection.

With a humanitarian disaster unfolding before our eyes, the Trump administration asked Congress to fix this untenable situation. Unfortunately, the progressive majority in the House refused. As a result, these loopholes remain embedded in our laws and court decisions.

The Trump administration, however, has refused to go along with this chaos. Over the past year, it has published multiple policies and regulations to try to address the weaknesses in our laws. It has:

1. Worked to expand the “Remain in Mexico” policy that allows us to send asylum seekers back to Mexico while they await their court hearing for asylum.

2. Decreased the availability of bond for asylum seekers.

3. Required asylum seekers arriving at our southern border from countries other than Mexico to have first sought asylum in another country on their way to the U.S.

4. Required asylum seekers to request asylum at ports of entry.

Some of these policies have been stopped or altered by courts, but such efforts are having an impact. By not giving asylum seekers and those with children quick release into the U.S., the federal government is increasingly deterring illegal immigrants from making the dangerous journey in the first place.

The Wall Street Journal reports that apprehensions and those turned back at ports of entry declined to around 64,000 in August – less than half of May’s total, though still about 17,000 higher than in August 2018.

Yes, illegal immigration tends to naturally fall in the summer as the heat discourages migrants from making the journey. But the fall over the past few months is sharper than previous years. Clearly, the new policies are having an impact.

But it’s also clear that the policies themselves are not perfect. Some run afoul of other immigration laws; some may be excessively severe; most can’t address the entirety of the problem; and all such policies are ultimately temporary and can be undone by future administrations.

While Congress fiddles, the administration continues to reach for the tools at its disposal.

A far better solution would be legislation to fix these loopholes in a more permanent and measured way. Until calmer heads on the left can agree that illegal immigration should be stopped, imperfect solutions are better than none at all.