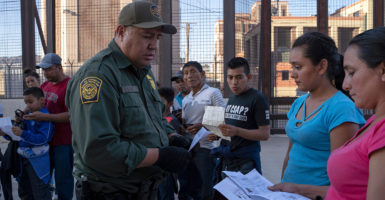 A Customs and Border Protection agent checks documents May 16, 2019, in El Paso, Texas, for a group of migrants who crossed the Rio Grande. (Photo: Paul Ratje/AFP/Getty Images)

A federal appeals court said it will block the Migrant Protection Protocols program within its jurisdiction next week, unless the Supreme Court chooses to wade in.

In the latest back-and-forth between the 9th U.S. Circuit Court of Appeals and the Trump administration, the appeals court announced late Wednesday that it will block Migrant Protection Protocols—more popularly known as the “Remain in Mexico” program—in California and Arizona, the two states that are within the court’s jurisdiction.

In its order, the court deemed that asylum officers are placing migrants in dangerous environments in Mexico and that they are not asking whether they have a fear of being sent to Mexico to await their court dates.

“Uncontradicted evidence in the record shows not only that asylum officers implementing the MPP do not ask whether asylum-seekers fear returning to Mexico. It also shows that officers actively prevent or discourage applicants from expressing such a fear, and that they ignore applicants who succeed in doing so,” the order read.

“Uncontradicted evidence also shows that there is extreme danger to asylum-seekers who are returned to Mexico,” it continued.

The 9th Circuit Court of Appeals on Friday blocked the Remain in Mexico program for the entire southern border. However, the court suspended the order after the Trump administration filed an emergency motion requesting a stay.

Since launching Remain in Mexico in January 2019, the program has become the administration’s most effective tool at controlling the U.S immigration crisis. The program requires most non-Mexican nationals who claim asylum at the U.S. southern border to wait in Mexico for the entirety of their court proceedings.

Since its inception, Migrant Protection Protocols has sent tens of thousands of migrants across the border to wait in Mexico, mostly eliminating the possibility for them to be released into the interior of the U.S.

The administration, including immigration enforcement leaders, have lauded the program for effectively ending the border crisis. However, immigration rights advocates and other opponents argue Remain in Mexico is inhumane in that it forces migrants to stay in purportedly unsafe and unsanitary conditions.

The appeals court ultimately ruled on Wednesday that the program will not be in effect in Arizona or California beginning on March 12.

“We grant the Government’s request and extend our administrative stay entered on Friday, February 28, until Wednesday, March 11,” read a section of the court’s conclusion.

“If the Supreme Court has not in the meantime acted to reverse or otherwise modify our decision, our partial grant and partial denial of the Government’s request for a stay of the district court’s injunction, as described above, will take effect on Thursday, March 12,” it continued.