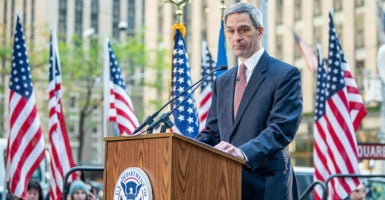 The president’s “diplomatic persistence” has deterred illegal migrants and led to a sharp decline in unlawful border crossings, a top U.S. immigration official said Wednesday in an interview with The Daily Signal.

“Previous administrations were unwilling to push as President Trump has,” said Ken Cuccinelli, acting deputy secretary of the Department of Homeland Security.

“In 2018, when it seemed we were getting nowhere with the Mexican government, the president had enough, so he used the tools at his disposal in tariffs, withheld aid, visa blockers. There was a sea change from Mexico,” Cuccinelli said.

Chief among the tools, Cuccinelli said, is the Migrant Protection Protocols, a program that requires asylum-seekers to remain in Mexico while their case is being adjudicated.

The program required about 60,000 immigrants seeking asylum in the U.S. who crossed the border illegally or lacked documentation to wait in Mexico, where that nation’s government provides humanitarian conditions during their stay.

Since May, illegal crossings of the southern border dropped by 70%.

The government of Mexico has done more than Congress to help Trump address the southern border crisis, Cuccinelli told The Daily Signal.

“Previous presidents, Republican and Democrat, wouldn’t lay a glove on Mexico. Part of the president’s success is that Mexico believed he would do it, because he did do it,” Cuccinelli said. “So we have cooperation from Mexico that in the past we have not gotten.”

For five months, Cuccinelli, a former Virginia attorney general, has been the acting director of U.S. Citizenship and Immigration Services, which is part of the Department of Homeland Security. Earlier this month, acting Homeland Security Secretary Chad Wolf named him to the department’s No. 2 slot.

The new “remain in Mexico” program falls under a 1996 statute, the Illegal Immigration Reform and Immigrant Responsibility Act. The Trump administration applied the law to create what is officially called the Migrant Protection Protocols.

Section 235 of the Immigration and Nationality Act of 1965 also says that the federal government “may return the alien to that territory pending a [removal] proceeding.”

Michael Knowles, president of the union that represents Citizenship and Immigration Services employees, last week criticized the policy before the House Homeland Security subcommittee on border security, facilities, and operations.

“These policies are illegal, they’re immoral, and they’re the basis for human rights abuses on behalf of our nation,” Knowles told the House panel. “I don’t know a single asylum officer in the country who believes this is a good policy.”

This accusation apparently isn’t a major concern for Cuccinelli, who questioned whether Knowles is qualified to make such legal judgments.

“I didn’t ask him if it was legal and he didn’t ask me about brain surgery,” Cuccinelli said. “It’s not appropriate to ask a nonlawyer about the legality of a program.”

That said, the acting deputy secretary said he remains concerned about what he calls activist courts.

“We are always worried about activist courts,” Cuccinelli said. “People who want to erase borders go to the same judges and the same courts over and over again.”

The alternative to remaining in Mexico would be “catch and release,” allowing illegal border crossers to be released into the country but ordered to return for a court date.

In most cases, a judge will deny the asylum claims, but illegal immigrants don’t appear for their court date and go undetected. Immigration courts have a backlog of more than 300,000 cases.

“People who were planning on coming across the border will no longer expect that they will stay in the country,” he said.

The program still allows asylum-seekers with a meritorious claim to get expedited relief.  It also gives relief to the overburdened immigration courts.

The program includes exceptions on a case-by-case basis for those who would face imminent danger in Mexico; for unaccompanied children and illegal immigrants already in expedited removal procedures; and for others deemed to be “vulnerable populations.”

But, Cuccinelli said, about 99% of border crossers with asylum claims are sent back to wait in Mexico.

The old catch-and-release practice actually helped smugglers and traffickers who could win automatic entry into the United States by showing up with a child.

Historically, illegal immigrants were mostly white males and were removed in 48 hours if they didn’t have a legal right to remain in the country.

Today, more than 60% of illegal entries are by family units, according to the Department of Homeland Security. Also, 60% of border crossers are not Mexican.

In fiscal year 2017, U.S. Customs and Border Protection captured 94,285 family units from the Northern Triangle countries of Honduras, Guatemala, and El Salvador, and 99% of them remain inside the United States.

However, about 90% of asylum claims from the Northern Triangle countries are found to lack merit, according to DHS.

“With Northern Triangle countries, the president pulled millions in foreign aid and they [then] entered sound cooperative agreements,” Cuccinelli told The Daily Signal.

In November and December 2018, the Department of Homeland Security reported encountering about 2,000 illegal immigrants per day at the southern border. That wasn’t a record for entries, but was a record for family units.