What It’s Like to Travel Internationally During the Coronavirus Outbreak 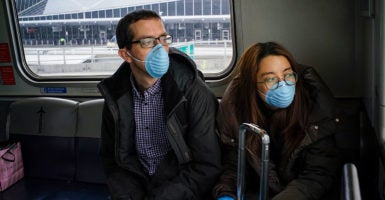 KYIV, Ukraine—After the Lufthansa airliner landed at Kyiv’s Boryspil International Airport, the Airbus A320 jet taxied to the jet bridge and parked. Then flight attendants told the passengers on board to keep their seats.

A few minutes later, a pair of officials with the Ukrainian Ministry of Health, wearing protective clothing and face masks, boarded the jet and proceeded to take everyone’s temperature by holding a laser thermometer to our foreheads.

They were checking us for fevers, looking for anyone who might be carrying the novel coronavirus.

Sitting there last Wednesday afternoon, waiting to have my temperature taken, I looked over at the man sitting beside me. He was snapping pictures of this moment on his iPhone.

He looked at me. I nodded, and the man nodded back.

“This is crazy,” he said in Russian. “People are losing their minds.”

Once cleared, the passengers disembarked the jetliner. Several more Ukrainian officials stood in the jet bridge, just outside the aircraft door. They gave each disembarking passenger a careful look, likely examining us, in my estimation, for any obvious signs of illness.

At the passport control desk a few minutes later, the Ukrainian Border Guard officer—who also was wearing a face mask—asked whether I’d been to Asia recently.

The man furrowed his brow as he flipped through my passport, pausing at pages that were marked with stamps from places such as  Iraq, India, and Nepal. I understood the Border Guard officer was likely checking the dates on those stamps. Thankfully, I’d made the trips many months or years ago.

Satisfied, the officer at last nodded curtly and handed back my passport and let me go.

Yet, I couldn’t help but also notice how empty the airport seemed compared with its normal hustle and bustle. Maybe I’d just come in at an odd hour, I thought. Or, perhaps, I was making a false correlation, mistakenly seeing things through the lens of the coronavirus story when no true link existed.

Yet, the fact is that it was 1 p.m. on a Wednesday and Kyiv’s main airport was a ghost town compared with its normal activity.

And, judging by all the people wearing face masks (which is not something you typically see in Ukraine in such large numbers), I knew I wasn’t simply imagining the anxious mood caused by the global coronavirus outbreak here at Ukraine’s biggest international airport.

That same level of subtle but unmistakable anxiety was also evident among air travelers at Frankfurt am Main Airport, Vienna International Airport, and Newark Liberty International Airport—places where I’d had layovers on my trip to the U.S. and Canada and back from Ukraine (where I live and work as a foreign correspondent for The Daily Signal) for a weeklong speaking tour about the war.

On the trip, I got a good look at how the coronavirus outbreak has rattled international travelers. I was also able to observe the protocols in place at the airports I traveled through, as officials attempted to screen travelers who might be at risk of carrying the disease.

The novel coronavirus, or COVID-19, as it’s now known, has killed some 2,900 people in China and has spread around the world. Globally, there have been about 88,000 cases of the virus as of March 2.

A total of 22 have died in South Korea, 35 in Italy, and 54 in Iran, and six in the United States New cases have been reported in the U.S., Brazil, the Spanish Canary Islands, Nigeria, Germany, Romania, and Belarus. The list goes on.

Around the world, peoples and their governments are consequently and understandably on edge.

Wuhan, China—the virus’s epicenter—remains on lockdown. Many airlines and countries maintain travel bans on China. In the U.S., investors are anxious about the disruption to global supply chains and the potential economic fallout should the disease spread to America.

Consequently, the Dow Jones Industrial Average last Thursday saw its largest one-day drop in history.  The stock market saw its fastest decline since the Great Depression. It rallied March 2 with the biggest recovery in nearly 11 years.

Humans  now are more connected to each other than we’ve ever been before. Global air travel has doubled since 2003, the year that severe acute respiratory syndrome (SARS)—another coronavirus—infected more than 8,000 people worldwide, killing 774.

In Vienna on Feb. 18, as I waited to board a flight to Newark Liberty International Airport, the gate attendant announced over the intercom that all Chinese citizens and anyone who had recently traveled from China should present themselves to airline personnel.

I’m not sure what happened to the travelers who met those criteria. Yet, it was clear what the red flags are for potential carriers of the coronavirus—at least in the eyes of airline officials, and the U.S. Customs and Border Protection agency.

Michael Bociurkiw, a global affairs analyst and aviation security expert, says that travelers should avoid trips to China and other countries with outbreaks of coronavirus, as well as countries with “weaker” health care systems.

Bociurkiw also cautioned that any international travel—even to countries currently without a coronavirus outbreak—runs passengers the risk of accidentally getting stuck abroad if the virus unexpectedly and swiftly emerges at their destination.

“The flights on the way back may be canceled, or travel restrictions may be put on you,” Bociurkiw warned. “This thing is moving so quickly, it’s very difficult to predict what’s going to happen even a few days from now.”

Every so often, events happen in the world that create an unspoken connection between strangers.

We’ve all been there and know about this phenomenon.

How strangers turned to each other and shared a worried look when watching news coverage of the Sept. 11, 2001, terrorist attacks. Or, how strangers embraced each other in celebration of the news of Osama bin Laden’s death in a Navy SEAL raid in 2011.

When big events happen, good or bad, there is a particular human inclination to share the emotional gravitas of those events with the people around you—even if you don’t know them.

At Newark Liberty International Airport last Wednesday, for example, as I waited to catch a connecting flight to Frankfurt, I made eye contact with a man wearing a face mask.

I wore a face mask, too. And when our eyes met that man and I exchanged the ever slightest of nods.

In that brief moment, we both acknowledged a mutual understanding of an unspoken commonality: We were both taking the coronavirus threat seriously.

Crossing the land border back into the United States last week after my speeches in Canada, the U.S. Customs and Border Protection officer rifled through my passport with seriousness.

“Where do you live?” he asked.

The officer raised an eyebrow and gave me a look.

He asked why I live in Ukraine. I explained that I’m a foreign correspondent and am married to a Ukrainian woman.

“Any recent travel into Asia?” he asked.

“No, sir,” I answered honestly.

He looked me over again for what seemed like an uncomfortably long and silent moment. Then he handed me back the passport and told me to move on.

After my weeklong stay in the U.S. and Canada was over, I flew back home to Ukraine on Wednesday. And I must say—what a difference a week makes.

In that time, new coronavirus cases had emerged across the world. Most notably in Italy, where an outbreak has, so far, left more than 1,600 people infected and 35 dead as of March 2.

The coronavirus outbreak is now bordering on pandemic status, according to the World Health Organization. And although the U.S. so far has been spared a major outbreak, Centers for Disease Control and Prevention officials warn that it’s only a matter of time before more cases of the disease start appearing in America.

Now, I’ll be the first to freely admit that, while I’ve been alarmed by the coronavirus story, I didn’t really take it seriously before last week. Honestly, it seemed like a distant news item that, while alarming, wasn’t really a threat to my own personal safety.

That flippant attitude of mine ended, however, when I boarded a jumbo jet crammed with hundreds of people from various countries to breathe recirculated air for nine hours as we crossed continents.

Bociurkiw, the aviation security expert,  acknowledged that “we can’t shut down the world.” However, he also cautioned that if you spend time in confined environments such as aircraft cabins, subways, or trains, then “your risk goes way, way up.”

Before I left for the U.S. and Canada last week, my wife bought me some face masks and a copious supply of hand sanitizer.

I was reluctant to use the face mask at first. It seemed a little over the top. But by the time of my return journey to Ukraine last Wednesday, my decision to don the face mask was a no-brainer. And I certainly wasn’t the only one, even if the actual utility of face masks is a little dubious.

“A lot of people have the idea that the surgical face mask will protect them. That’s actually not true, according to [World Health Organization] officials,” Bociurkiw said, adding that frequently washing your hands, using disinfectants, and maintaining distance from other people were more effective ways to avoid infection.

The worry in others’ demeanors was clear.

If another traveler so much as coughed or sneezed while standing in line to board an aircraft, or while cooped up in a cramped bus on the way out to a jet (which is all too common at Frankfurt am Main Airport), then everyone nearby seemed to edge away. I unconsciously did so, too.

It hadn’t been like that a week earlier, when I’d traveled from Ukraine to New York on the outward leg of my trip. But attitudes outwardly and obviously had changed in the intervening week.

There was concern in the air. Not panic. Not yet. But the seeds of panic had been sown.

“I don’t blame people for being concerned about their travel plans,” Bociurkiw said.

Yes, it might be impossibly difficult now to contain the coronavirus.

But, in the end, it’s even harder to quarantine fear.