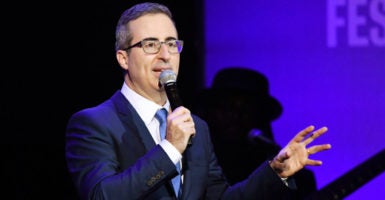 In the clip, I commented on the defects of “Medicare for All,” the big proposal for total government control over American health care.  The majority of House Democrats are leading sponsors of legislation to do just that, as are two of the party’s presidential hopefuls, Sens. Bernie Sanders of Vermont and Elizabeth Warren of Massachusetts.

Oliver’s program is a combination of comedy and commentary, and he didn’t disappoint. He treated his audience to an entertaining rant on the seemingly bounteous benefits of Medicare for All. Laughing along in affirmation, his adoring audience loved it.

In his fast-paced monologue, periodically punctuated with salty language, Oliver launched into an indictment of “multipayer” American health care. His list of charges is routine: Too many Americans pay too much for health care. (They do.) People fall through the cracks. (They do.) There are gaps in coverage and quality. (Yes, indeed.)

The British and the Canadians, Oliver insisted, were really better off, and he ran a colorful clip of a British show celebrating the National Health Service during the Olympics, complete with dancing nurses and joyous bed-jumping patients.

For those of us who have long acknowledged the defects of the American status quo, the key issue is not how we can destroy the nation’s public and private health coverage, but rather how we can best improve it by expanding personal choice and lowering costs.

While Oliver and congressional progressives might think that the British and the Canadians are better off, there’s a lot of evidence on British and Canadian health care that indicates the opposite is true.

Oliver is good at poking fun at the status quo. But in making his case for the supposed superiority of the “single-payer” alternative, he doesn’t close the deal—whether his HBO fans realized it or not.

He noted that critics’ major objections to Medicare for All focus on a lack of personal choice, long waits for care, and big costs. One cannot help but notice that he doesn’t actually refute those common American objections, but rather dismisses and trivializes them.

On the topic of choice, for example, Oliver notes that “Americans are Americans,” after all, and are obsessed with personal choice, exercising direct control over so many aspects of their lives, even wasting as much as “40 minutes” pondering their multitude of Netflix options, or making, according to Oliver, stupid decisions like drinking “Bud Light.”

Analogously, what would be the logical “single-payer” alternatives? A single, state-run television channel? The abolition of the beer market, except for a refreshing can of “Old Bureaucracy”?

In my Fox News clip, I emphasized that under Medicare for All, patients would have no care or coverage alternatives. The question that Oliver neither raises nor answers is this: Under a government monopoly, what does someone do when the government plan cannot or will not provide the health care that he or she wants or needs?  Of course, they can do nothing, except perhaps write a desperate letter of complaint to their congressman. Maybe he’ll read it.

Oliver fails to mention that, in his native Britain, patients can and indeed do go outside of the government system to enroll in alternative private health insurance, and they can contract privately with British physicians. In Canada, the options are far more limited.

Oliver also fails to mention that in the House and Senate Democrats’ Medicare for All legislation, the exit doors are narrower than the gates of Heaven. No alternative private insurance is allowed to compete with the government program, nor can an American citizen contract privately with a physician, unless that physician refrains from participating in the national health insurance program for one full year.

On the topic of wait times, Oliver deploys a clip of my Heritage Foundation colleague Romina Boccia predicting the inevitable delays in medical care. Based on the British record, she is correct. For example, The Guardian, a leftist British newspaper, reports that 4.5 million Britons are awaiting hospitalization.

In 2018, a team of researchers writing for the Journal of the American Medical Association detailed the international metrics of access to care in a timely fashion. In the United States, only 6% of patients had to wait more than two months to see a medical specialist, compared with 39% of patients in Canada and 19% of patients in Britain.

Oliver insists the British wait lists are primarily for non-emergency medical issues. In fact, Britain is also struggling with the provision of emergency services, and waiting British emergency patients are suffering.

On waiting lists, delays, and denials of care, the British record is hardly worth emulating, and the Canadian “single-payer” record is even worse.

Then, there is the cost issue. Oliver doesn’t declare one way or another on whether or not Medicare for All would save or cost Americans more money. He concedes that the real costs could be astronomical. Good for him.

Based on the best available analyses, we can safely assume that outlawing virtually all existing private and public health insurance—replacing private insurance premiums and cost-sharing with new federal taxes—would not guarantee Americans lower costs. Indeed, the most granular econometric analyses of Medicare for All conducted by the Urban Institute, the Mercatus Center, and the Rand Corp. project even higher overall health care spending.

Sanders, to his credit, makes it crystal clear that his Medicare for All program would involve broad-based taxation on the many, not just taxing the rich few.

Two detailed econometric studies from very different analysts from different sides of the political spectrum show that the program will cost Americans more.

First, Kenneth Thorpe, a professor of health policy at Emory University, estimated in 2016 that the Sanders proposal, if it were fully funded, would require a 14.3% payroll tax, as well as a 5.7% income-related premium. In other words, it would be a level of taxation equal to 20% of payroll. Thorpe concluded that slightly more than 70% of all working families would pay more for health care than they do under the current system.

More recently, my colleagues Edmund Haislmaier and Jamie Hall at The Heritage Foundation have undertaken another detailed econometric analysis of the Medicare for All program.

Confirming Thorpe’s basic findings, the Heritage estimates show that Medicare for All would require additional taxation amounting to 21.2% of all wage and salary income. After accounting for the projected reductions in private health spending and the new taxes, they estimate that the average annual disposable household income would decline by $5,671.

The additional taxation would affect almost two-thirds of American households, or 73.5% of the entire American population. Yes, Americans would pay more.

Medicare for All has big trade-offs: the loss of choice, the problem of waiting for care, and the high cost. Yet Oliver thinks that the trade-offs are worth plunging ahead.

Oliver also concedes that this legislative effort would be politically hard, requiring serious tax increases, and warns that it would have to be “carefully designed” to work well. He neglects to mention, however, that years and years of design work have already been done.

That design is plain to see in the black-and-white text of the House and Senate bills. All Americans have to do is read them.