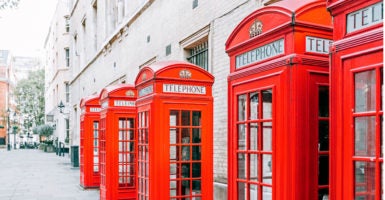 While American patients’ survival rates for cancer are among the highest in the world, the British performance is comparatively poor. (Photo: Getty Images)

Congressional sponsors of “Medicare for All” single-payer legislation—bills abolishing virtually all existing public and private health insurance—routinely promise that all Americans will get equal access to higher quality care and enjoy superior medical outcomes.

Performance, however, is the acid test of sound policy. While the U.S. “single payer” experience is limited to the Veterans Administration program, recently plagued by headline-grabbing care delays, working models of national health insurance can teach Americans sober lessons in government-controlled health care.

Look at the British crisis. Consider Britain’s National Health Service, established in 1948. In 2017, the British House of Lords issued a stunning report on the state of the NHS. It concluded, “Our NHS, our ‘national religion’, is in crisis and the adult social care system is on the brink of collapse. No one who listened to the evidence presented by a vast array of expert witnesses who appeared before us can be in any doubt about this.”

That evidence has been building for decades, and recent high-profile cases show that the British crisis is chronic. In the October 2019 issue of the Annals of Surgery, one can check out a comparative study of English and American in-hospital mortality between 2006 and 2012.

Researchers found that Americans’ surgical treatment for abdominal emergencies (like appendicitis or a ruptured aneurysm) was roughly twice the rate for comparable English patients, and that the English death rate was also significantly higher. Thus, they concluded, “England and US Hospitals differ in the threshold for surgical intervention, which may be associated with increases in mortality in England for these 7 general surgical emergencies.”

Interestingly, this 2019 study reinforced earlier findings in the April 2018 edition of the Annals of Surgery, where another team of researchers found greater patient mortality after emergency laparotomies—surgical abdominal incisions to treat emergency medical conditions—in Britain compared with the United States.

Regarding British performance, medical outcomes for the world’s top killers, cancer and heart disease, is another big story. While American patients’ survival rates for cancer, such as breast, colon, and prostate cancer, are among the highest in the world, the British performance is comparatively poor.

The reason: British cancer patients do not benefit from the kind of robust investment in combatting cancer that characterizes American health care. That investment includes not only the recruitment and deployment of more highly-trained medical staff to serve the patient population, but also a greater reliance on advanced medical technologies and cutting-edge pharmaceutical therapies.

The British, operating under a government “global budget” for health spending, do not even come close to the American effort.

For Britain, there are approximately seven radiologists per 100,000 people. Even in the European Union, there are an average of 12 radiologists per 100,000 population. Delays in cancer care thus contribute to Britain’s relatively poor cancer survival statistics. “Our diagnostic capacity is woefully poor,” says Sir Michael Richards, Britain’s pre-eminent cancer expert.

As noted, British health care operates under a global budget, a fixed allotment of funds for the health services. This is roughly the same financing arrangement embodied in the House Democrats’ legislation (H.R. 1384) to replace and radically remake American health care. There is no logical reason why America’s future experience with such a system would be radically different.

The clash of high patient demand for “free care” at the point of service with limited health care supply is manifest in the notorious British waiting lists. According to The Guardian, a prominent left-leaning British newspaper, last year a total of 4.3 million British citizens were awaiting hospitalization, the highest level in 10 years.

As for shortages, the costs to patients are manifest in many other ways, especially in doctor and nursing shortages. According to a recent edition of The Guardian, the British system is facing a serious physician shortage, particularly specialists, and especially in rural areas. Worse, 43% of advertised medical positions went unfilled last year, exacerbating the shortage in England.

Patients, of course, bear the brunt of this dearth. Notwithstanding political promises of equal access to care, government budgeting guarantees no such thing. British mental health patients, as just one example, are being shortchanged.

According to another recent edition of The Guardian, mental health patients being treated in “decrepit,” underfunded, and understaffed mental institutions are at increased risk for suicide. According to NHS Providers, “Continued under-prioritization of the mental health estate is having a real impact on patients.”

To improve the delivery of health care, Americans need not convert to anything even remotely resembling Britain’s secular “national religion.” Rather than destroy what’s working in American health care, Washington policymakers should take decisive steps to lower health costs through intense competition and empower individuals and families with greater personal choice of coverage and care.