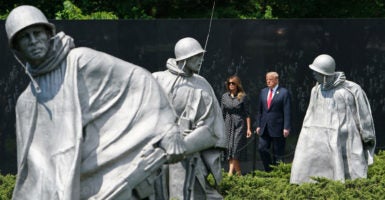 Korea is known as the “Land of the Morning Calm.” But on June 25, 70 years ago, North Korea shattered that tranquility by unleashing a brutal war, which lasted three years and devastated the Korean Peninsula.

Pyongyang’s invasion revealed the true nature of the regime—characteristics which remain ingrained despite the passage of time and changes in leadership. North Korea continues to subjugate its citizens and threaten its neighbors.

That tragic conflict has been referred to as “The Forgotten War.” It is an unfitting label, since it will never be forgotten by the people of South Korea.

Nor will that shared ordeal ever be forgotten by those Americans who treasure freedom and the willingness to bravely and resolutely fight for it against even seemingly insurmountable odds.

Today, leaders and citizens of South Korea and all of the nations that sent forces to repel the invasion rightly honor the brave men and women who answered the call to duty.

Accounts of the brutal fighting and the prolonged suffering of the people are devastating to read. How many of us could measure up against the bravery and stoicism shown by so many during those trying times?

The Korean War Veterans Memorial in Washington, D.C., includes the homage, “Our nation honors her sons and daughters who answered the call to defend a country they never knew and a people they never met.”

It is a fitting reminder that freedom is not free, that it must be defended—even at the cost of sending so many young men and women into harm’s way.

The memorial’s 19 larger-than-life statues portray the bravery and the weariness of those who bore the brunt of those long years of fighting. Its Pool of Remembrance reflects the human cost of the tragedy of that war.

It has been said that the U.S.-Korean alliance has been “forged in blood.” That is surely true, because the true mettle of an enduring alliance—of a partnership, of a friendship—such as that between our two countries can only come when we have shared not only the best of times, but also of the worst of times.

South Korea has fought alongside U.S. forces in every major conflict since the Korean War. From 2004 to 2008, Seoul maintained an army division in Iraq, the “Zaytun Division,” to help with peacekeeping and reconstruction tasks. Units were maintained in Afghanistan, as well.

The allies have remained shoulder to shoulder, not only out of tradition and honor, but out of necessity. The North Korean threat remains today, with even greater weapons of devastation. And men and women continue to stand unflinchingly on the ramparts of freedom, bearing the burden on our behalf, as they have done for decades.

The demilitarized zone is a vivid gash, dividing the Korean Peninsula and the Korean people. To stare across it is to be reminded of the lingering wound to the Korean soul. It is heartbreaking to see South Koreans travel close to the dividing line, looking northward, yearning to be with their separated family members.

Until that joyful day, the cost of freedom will remain eternal vigilance.