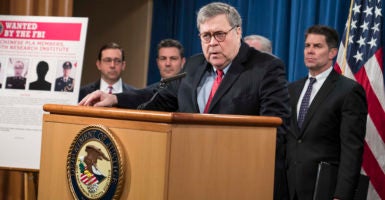 Attorney General William Barr participates in a press conference at the Department of Justice on Feb. 10. (Photo: Sarah Silbiger/Getty Images)

President Donald Trump vouched for Attorney General William Barr as top Republicans came to his defense after nine senators from the Democrat caucus demanded his resignation.

Trump said, “I have total confidence in my attorney general.”

Trump took media questions Tuesday at Andrews Air Force before he was set to leave for Los Angeles. The questions on Barr come just days after an ABC News interview in which the attorney general said Trump’s tweets—among other “constant background commentary” from others—make it “impossible” for him to do his job.

“I do make his job harder. I do agree with that. I think that’s true,” Trump told reporters Tuesday, somewhat uncharacteristically acknowledging a criticism from one of his top Cabinet officials.

In the ABC News interview, Barr said: “The president has never asked me to do anything in a criminal case.”

“I probably wouldn’t have gotten here without social media because I certainly don’t get fair press.”

“He’s a very straight shooter. We have a great attorney general and he’s working very hard,” Trump said. “He’s working against a lot of people that don’t want to see good things happen, in my opinion.”

Barr’s criticism came after the Justice Department suggested a lighter sentence for Roger Stone, a supporter of Trump during the 2016 election, though he didn’t work on the campaign. Trump had tweeted about the matter.

Stone was convicted of obstructing a congressional investigation, making false statements to Congress, and witness tampering. Prosecutors in the case initially suggested seven to nine years—far more than the federal sentencing guidelines.

“I never spoke to him [Barr] about the Roger Stone situation,” Trump said. “Roger Stone, just so you know, didn’t work for my campaign. It was a very, very rough thing that happened to Roger Stone.”

Former Vice President Joe Biden accused Barr of “abuse of power,” and called for him to resign. Also, more than 2,000 former Justice Department officials have called for Barr to resign.

Meanwhile, eight Democrat senators and one independent last week have called for Barr’s resignation. The Democrat sanators are Elizabeth Warren and Ed Markey of Massachusetts, Richard Blumenthal of Connecticut, Pat Murray of Washington state, Jeff Merkley and Ron Wyden of Oregon, Chris Van Hollen of Maryland, and Mazie Hirono of Hawaii. They are joined by Bernie Sanders of Vermont.

“Attorney General William Barr is a man of the highest character and unquestionable integrity,” the Republicans said in a statement. “The Senate has attested to this fact by confirming him four times to positions of the utmost public trust. In each case, his commitment to the rule of law, the Constitution, and the American people has proven this trust to be well-placed.”

Trump said he did not get involved, but that he could have.

Despite the Barr criticism over Trump’s tweets, Trump said he wouldn’t be president without social media.