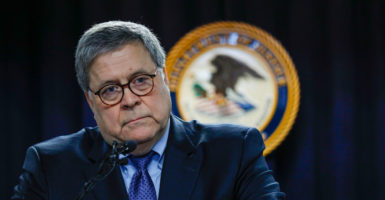 William Barr's handling of the over-the-top recommendations by federal prosecutors demonstrates that he is doing exactly what attorneys general are supposed to do. Pictured: Barr announces an anti-crime initiative in Detroit on Dec. 18, 2019. (Photo: Bill Pugliano/Getty Images)

Senate Minority Leader Chuck Schumer is not happy—again. And neither are other elected Democrats who have mounted a full-scale attack against Attorney General William Barr for recommending a reasonable prison sentence for Roger Stone, rather than the draconian sentence Barr’s subordinates advocated in a court filing.

Whether the inspector general takes up the issue is anyone’s guess. But if his office does, its report no doubt will highlight the fact that all lawyers in the Justice Department work for the attorney general, and that every attorney general has the right to overrule (and even fire) his subordinates in any case.

For his part, Barr told reporters that “the essential role of the attorney general is to keep law enforcement, the criminal process sacrosanct to make sure there is no political interference in it. And I have done that, and I will continue to do that.”

Contrary to the claims against Barr of unfair “political interference” in the pending sentencing of Stone, his handling of the over-the-top recommendations by prosecutors demonstrates that he is doing exactly what attorneys general are supposed to do and that he is committed to restoring evenhanded enforcement of our nation’s laws.

No one disputes that Stone was accused and convicted of several serious crimes—obstructing a congressional investigation, making false statements to Congress, and witness tampering.

Let’s set aside questions that have arisen about the trial and conviction given the recent revelations that the jury foreperson, a former Democratic congressional candidate, exhibited an anti-Trump bias in numerous posts on social media (calling Trump a #KlanPresiden) and tweeted specifically about Stone’s arrest.

Everyone agrees that Stone—once duly convicted—must be punished for his actions.

But what is an appropriate punishment? And more importantly, who gets to decide?

Those are the questions that came to the forefront when four career prosecutors recommended that Stone—a nonviolent, first-time offender—serve seven to nine years in prison, and even more so when  Schumer requested that the inspector general investigate the overriding of the prosecutors’ recommendation by higher officials within the Justice Department.

Stone’s base offense level under the federal sentencing guidelines—which are only advisory in nature—calls for him to serve 15 to 21 months in prison. The prosecutors on the case, however, submitted a sentencing memorandum arguing that several other enhancements should apply that would raise the proposed sentence to seven to nine years.

Prosecutors argued that the biggest of these enhancements should apply because Stone threatened “to cause physical injury to a person, or property damage, in order to obstruct the administration of justice.”

Their basis for that claim is several statements made by Stone when he told a potential witness—radio talk show host Randy Credico—that Credico should “prepare to die” and that Stone would take his dog away from him.

True, these sound bad on their face. But Credico told the judge he did not take these bombastic threats seriously and never felt physically threatened. In fact, Credico said that these “bellicose tirades” were just “Stone being Stone. All bark and no bite.”

Thus, when taken in context, this recommended enhancement seems like a stretch—something that would be more appropriately applied in an organized-crime case or gang-related case.

If this single enhancement were removed, Stone’s guideline range would drop significantly, to 37 to 46 months in prison.

Federal judges typically give great weight and serious consideration to the recommendations of the prosecutors on a given case. Here, the Justice Department filed an amended sentencing memorandum telling the judge that “the range of [approximately seven to nine years] presented as the applicable guidelines range would not be appropriate or serve the interests of justice in this case.”

The Justice Department noted that a sentence of approximately seven to nine years “more typically has been imposed for defendants who have higher criminal history categories or who obstructed justice as part of a violent criminal organization.”

Schumer and others claim that the recommended lower sentence is the result of undue political influence in the criminal justice process.

Warren has called for Barr’s impeachment, as have others on the left and in the media.

Really? What choice did those at the Justice Department have–up to and including Barr—but to step in and correct an unreasonable and unduly harsh sentencing recommendation?

This is particularly the case in light of reports that the recommendation these prosecutors made was, in fact, far harsher than what they told senior leadership they were going to make to the court. This raises questions about whether the prosecutors misled Barr and other department leaders in the first place.

It is the duty of the attorney general to lead the Justice Department by setting priorities and ensuring the fair administration of justice, devoid of political influence or pressure.

This matter is complicated, of course, by President Donald Trump’s tweets about the sentencing recommendation for Stone.

Yes, the president has a right to tweet. But it can complicate the case when this or any other president makes public statements about an ongoing federal criminal matter. It’s what President Barack Obama did in 2009 about the appropriateness of the death penalty for Khalid Sheikh Mohammed, accused of being a planner of the 9/11 attacks.

This undercuts Schumer’s claims of political interference. Barr says the president’s tweets had nothing to do with his decision.

Barr’s actions were necessitated by the initial unfair (and seemingly unjustified) recommendation of up to nine years in prison for a nonviolent, first-time offender.

His actions as attorney general were an important step toward ensuring accountability in the Justice Department and fulfilled his promise to restore the impartial administration of justice for all of our nation’s citizens.