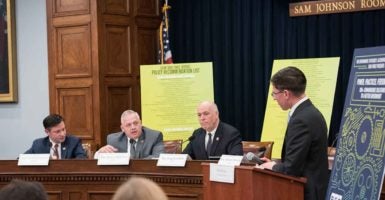 A GOP playbook for a more efficient, effective, and accountable federal government is described at a briefing by, from left, Reps. Mike Johnson of Louisiana, Denver Riggleman of Virginia, and Greg Gianforte of Montana. The Heritage Foundation's Rob Bluey, right, acted as moderator. (Photo: Erin Granzow for The Heritage Foundation)

A new “playbook” for conservative lawmakers aims to bring more efficiency, effectiveness, and accountability to the federal government, leaders of the House’s largest caucus say.

“We are producing a playbook that we intend to run when the Republicans return to the majority,” Rep. Mike Johnson, R-La., chairman of the Republican Study Committee, said Thursday in unveiling the document in a press briefing on Capitol Hill.

“This issue is so important, and this is some of the most fun to talk about, because everybody knows the government is too big,” Johnson said, adding: “What it does it doesn’t do very well in almost every case except the military, and even people quibble with that.”

Johnson, a lawyer first elected to the House in 2016, is in his second term.

Rep. Greg Gianforte, R-Mont., chairman of an RSC task force on government efficiency, accountability, and reform, said the playbook has three main objectives in its more than 100 recommended solutions.

The first objective, Gianforte said, is to “restore the constitutional power structures,” as well as offer “additional congressional oversight” to maintain better checks and balances and rein in the runaway bureaucratic state.

The second objective, the second-term Montana Republican said, is to reform government practices.

“Here we specifically looked for wasteful programs that could be consolidated or streamlined, or in certain cases eliminated,” said Gianforte, a businessman and engineer.

The third objective is reforming policy for government personnel, something on which he said he has specific insight:

I come from the private sector, having built a whole bunch of technology businesses and been CEO of a public company. We wanted to bring some of the private sector practices into personnel management so that federal workers can be paid appropriately, can have a little more skip in their step.

But we also have accountability in how they do their jobs.

Rep. Denver Riggleman, R-Va., a former Air Force intelligence officer and National Security Agency contractor in his first term, said the playbook is a “commonsense push towards making sure that we do integration” and that “through streamlining, maybe we can get the bureaucracy out of our chili.”

“And I think also when you do own companies and you see this happening—I’ve had to work in this space, you know—the bureaucracy is really sort of controlling everything you’re trying to do,” Riggleman said.

Rob Bluey, vice president of communications at The Heritage Foundation and executive editor of The Daily Signal, served as moderator for the event.

Rachel Greszler, a Heritage Foundation research fellow in economics, budget, and entitlements who joined a panel of experts following remarks from lawmakers, said the federal government is long overdue for reform.

“Taxpayers pay well over $150 million each year for federal workers to not perform the jobs they were hired to do,” Greszler said in prepared remarks, adding:

Over 150 federal union officials stole more than $4.5 million from their unions’ dues. Many of these union officials were federal employees being paid by taxpayers as part of official time.

Taxpayers should not pay employees not to do their jobs and to instead advocate for policies that will cost taxpayers more and prevent accountability.