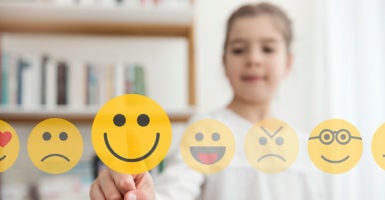 The additions are part of the Unicode Consortium’s 117 new emoji for 2020, including a polar bear, bubble tea, a hug, and a woman or gender-inclusive person in a tuxedo. (Photo: Fotosipsak/Getty Images)

A variety of transgender-inclusive emoji will be added to platforms such as Apple and Android this year, including an emoji of a gender-neutral Santa Claus, the Unicode Consortium has announced.

The new emoji come as part of the Unicode Consortium’s addition of 117 new emoji for 2020, including a polar bear, bubble tea, a hug, a woman or gender-inclusive person in a tuxedo, and a transgender flag, according to Tech Crunch. The consortium made the announcement Wednesday.

Google reportedly sponsored five of the new emoji and co-sponsored the transgender flag emoji with Microsoft.

The gender-neutral Santa emoji is called “Mx Claus” and is “a sequence of the Adult and Christmas Tree emojis,” according to Emojipedia, both of which are “combined using a zero width joiner between each character and display as a single emoji on supported platforms.”

Santa Claus is a magical figure otherwise known as Saint Nicholas or Kris Kringle, depicted as a jolly man who wears a red suit and brings toys to boys and girls on Christmas Eve if they have been good all year long.

The concept of Santa Claus originated with legends of St. Nicholas, who lived in the third century, was renowned for his kindness and generosity, gave his wealth to the poor, and was declared a saint by the Catholic Church.

Apple and Google did not respond to The Daily Caller News Foundation’s requests for comment.