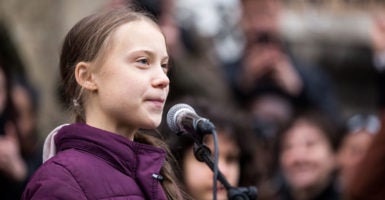 By 2020, according to a report on the study in The Guardian, “abrupt climate change could bring the planet to the edge of anarchy as countries develop a nuclear threat to defend and secure dwindling food, water and energy supplies.”

That was 16 years ago. Now that the year 2020 is upon us, are any of these “doom and gloom” scenarios actually occurring? Far from it.

Indeed, the planet has experienced a bit of lukewarming. However, claims of increases in extreme weather are vastly overstated.

If anything, societies have been able to grow wealthier over time, and, as a result, have been more capable of weathering the extreme events that have come their way.

In fact, here at home, the economy is thriving. Unemployment remains at historical lows. And by achieving energy independence, we have transformed the global energy landscape.

So where did all this alarmist rhetoric come from? Well, faulty computer modeling is a big part of the explanation. Computer models are sometimes based on assumptions that have been beefed up to satisfy a particular regulatory agenda.

This is part of a new study I published in the peer-reviewed journal Environmental Economics and Policy Studies with Ross McKitrick of the University of Guelph, Ontario, and Pat Michaels of the Competitive Enterprise Institute, a free-market think tank.

The study examined some of the assumptions made in one model used to estimate the economic effects of climate change. Called the FUND model, it is used to estimate a construct known as the social cost of carbon, which refers to the economic damages associated with carbon dioxide emissions over a particular time horizon.

Unlike other models the government has used before, however, the FUND model actually incorporates benefits of carbon dioxide emissions into its modeling.

Although it long has been understood that carbon dioxide emissions affect temperatures, the question is to what degree (pun intended). We found that updating these assumptions in line with more recent research can have a significant effect on the social cost of carbon.

In fact, under some realistic scenarios of moderate warming, we found that the social cost of carbon is essentially zero and might even be negative. That’s right: The benefits associated with a moderate amount of warming may outweigh the costs. Typically, such benefits result from longer growing seasons and increased agricultural output.

Bottom line: The FUND model, under very reasonable assumptions, indicates that a moderate amount of warming has practically no negative impact and might even be a good thing.

This study is just one of many in a stream of research on the social cost of carbon published by The Heritage Foundation’s Center for Data Analysis. My prior research with colleagues demonstrated that the computer models used to estimate the economic impact of climate change are extremely sensitive to reasonable changes in other assumptions as well.

These assumptions include foolish attempts to make projections 300 years into the future and ignorance of recommendations by the Office of Management and Budget regarding cost-benefit analysis.

In our research, we varied these assumptions by altering the model’s projections in a more reasonable manner, incorporating the OMB’s recommendations for this type of analysis and updating assumptions regarding climate sensitivity.  We found that tweaking these assumptions can reduce the social cost of carbon by as much as 80% or more compared to estimates made by the Obama administration.

Our conclusion: The Obama administration deliberately beefed up estimates of the social cost of carbon to justify its policy agenda. Ever since, Heritage has advocated that these computer models are so prone to user manipulation that it is not only naïve but dangerous to put them in the hands of lawmakers, regulators, and bureaucrats:

—Heritage’s analysis of the DICE model, also used to estimate the social cost of carbon.

—Heritage’s analysis of the FUND model.

—Heritage’s other peer-reviewed analysis of these computer models.

This work has been recognized by Congress as well as both the Obama and Trump administrations.

Yes, statistical models can be useful for understanding real-world phenomena.

Any model, however, is only as a good as the assumptions from which it is composed. Improperly specified models can deceive the public, misguide policymakers, and result in big costs for ordinary Americans.

>>> Related: How Faulty Assumptions in Climate Predictions Could Mean Big Costs for Americans