Climate Change Is a Fact. But These New Emissions Regulations Won’t Help the Environment. 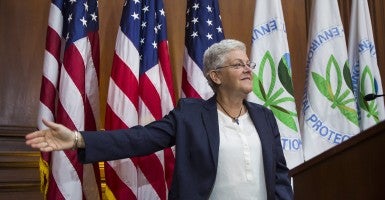 Draft regulations released Monday by the Environmental Protection Agency could cut carbon dioxide from existing power plants by 30 percent. Such a drastic cut will amount to a massive energy tax devoid of any benefit.

President Obama warned us it was coming, when he said in in 2008 that electricity prices would “necessarily skyrocket” under his cap-and-trade proposal.  And when our elected officials rejected that, he said there was more than one way to skin the cat.

But now he’s singing a different tune.  Promoting the regulations, Obama said, “Your electricity bills will shrink as these standards spur investment in energy efficiency, cutting waste, and ultimately, we’re going to be saving money for homes and for businesses.”

Electricity bills will shrink?  Is that a “if you like your insurance, you can keep it” type of promise?

To attract state buy-in, the agency’s regulation has different targets for different states and would allow states flexibility in implementation plans. But flexibility would merely shift the costs around, not prevent them from happening. If anything, state and regional implementation plans would protect special interests, which could then pass the costs on to American families.  The president stressed that the regulation “provides a huge incentives for states and consumers to become more energy efficient.”

Families and businesses don’t need a federal regulation or mandate to save money on energy. That incentive already exists: It’s called saving money.

Businesses and families make energy-saving investments when it makes sense to do so. The myopic view from the feds is that efficiency upgrades always make sense if they save money. And that’s not always the case. When the government forces efficiency choices on people, it takes away choices or overrides them.

Whether it is by cap-and-trade, regulation or a straightforward tax, restricting carbon emissions would harm American families and businesses through higher energy costs. Families would pay more to use less electricity. The costs would reverberate throughout the economy as affected industries pass higher costs onto consumers. Simply put, consumers would consume less and producers would produce less, resulting in income cuts, jobs destroyed and lost economic output.

The economic pain stemming from the EPA’s regulation would spread throughout the country, but some would be harmed more than others.  A tax that increases energy prices would hit hardest against America’s poorest families. The median family spends about 5 cents out of every dollar on energy costs, but low-income families spend about 20 cents.

Further, some industries are more energy-intensive and thus hit harder by higher energy prices. Particularly alarming is the damage the EPA regulations would inflict on America’s manufacturing base.

What’s worse is the economic pain comes with no environmental gain.

Obama is right to say climate change is a fact.  A near-universal consensus does exist that manmade emissions have some warming effect; however, the controversy is about whether human activity is the primary driver of climate change and the magnitude of climate change induced by GHG emissions. Most importantly, no matter what one believes regarding climate change, one thing is clear: The regulations would not have any noticeable impact on global temperatures.