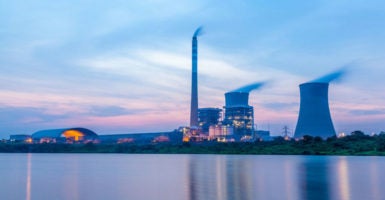 Studies by The Heritage Foundation have exposed critical weaknesses in a regulatory model that was employed by the Obama administration. (Photo: iStock Photos)

One provision of this order pertains to the social cost of greenhouse gasses—in particular, the “social costs” of carbon, methane, and nitrous oxide. The previous administration had used these social costs to justify its extensive regulatory agenda across the energy sector of the economy.

The Trump administration’s executive order stipulates that the Obama administration’s estimates of these costs should no longer be used for government policy. It also mandates that future cost-benefit analysis take into account the “best available science and economics” and specifically stipulates that recommendations outlined by the Office of Management and Budget be adhered to.

We have discussed these issues extensively in our research at The Heritage Foundation, and the Trump administration should be commended for making these decisions. The social costs of carbon, methane, and nitrous oxide come from a class of statistical models that the Obama administration used to supposedly quantify the economic damages associated with carbon dioxide emissions.

There are three statistical models that are used for estimating these social costs: the DICE model, the FUND model, and the PAGE model.

At The Heritage Foundation, we ran the DICE and FUND models and found them to be inherently unsound for regulatory policy and can be quite easily manipulated by user-selected assumptions. In fact, upon recalculating the social cost of carbon under the DICE model with much more reasonable assumptions, we found that the number arrived at can drop by well over 30 percent.

In addition to arbitrariness of essential components, their results are based on very questionable assumptions regarding the climate’s sensitivity, naïve projections reaching 300 years into the future, and ignorance of recommendations by the Office of Management and Budget regarding cost-benefit analysis.

We also examined the FUND model. After finding a mistake in the model’s initial specification, we found that it is not only just as sensitive, but can even produce a negative estimate of the social cost of carbon under very reasonable assumptions.

Those assumptions even include regulatory standards currently suggested by the Office of Management and Budget, and which the Energy Independence Act now requires policymakers to adhere to.

Ironically, this negativity would suggest that the government should subsidize, not tax, carbon dioxide emissions.

It became clearly evident that the Obama administration was using these flimsy models to rubber-stamp its environmental agenda and to manipulate and inflate the social cost of carbon.

>>> Read additional research by Heritage scholars on the social cost of carbon.

We found that the models used for these estimates are also extremely sensitive to very reasonable changes in assumptions. The estimates of the “costs” associated with these greenhouse gases can drop by over 80 percent under different, yet very plausible, assumptions.

Furthermore, evidence shows that the Obama administration’s assumptions regarding climate sensitivity were outdated, and this skewed its calculations regarding the social cost of carbon.

>>> Read Kevin Dayaratna’s testimony before Congress on this subject.

In additional peer-reviewed research, we found, alongside professor Ross McKitrick of the University of Guelph, that more up-to-date assumptions regarding climate sensitivity make it possible to take into account proper interactions regarding the oceans, which if not properly accounted for, can artificially inflate the social cost of carbon.

While these models may be interesting academically, because they are so sensitive to very reasonable changes in assumptions, they can be easily manipulated by policymakers, regulators, and bureaucrats. As a result, they can form the basis for potentially burdensome energy regulations.

Trump’s newly signed executive order is thoroughly informed by the analyses described above. The administration should be strongly commended for recognizing the flawed nature of these old models, and for rescinding the Obama administration’s estimates of the social cost of greenhouse gases.