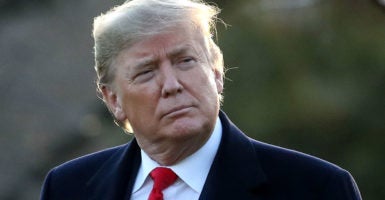 The Trump administration withheld $214 million in security assistance to Ukraine in the summer of 2019, according to the Government Accountability Office. Pictured: President Donald Trump walks toward Marine One before departing the White House Jan. 9, 2020, in Washington, D.C. (Photo: Mark Wilson/Getty Images)

The Trump administration violated the law by withholding $214 million in security assistance to Ukraine in the summer of 2019, according to a legal opinion by the nonpartisan Government Accountability Office.

“Today, GAO issued a legal decision concluding that the Office of Management and Budget violated the law when it withheld approximately $214 million appropriated to DOD for security assistance to Ukraine,” GAO General Counsel Thomas Armstrong said in a written statement Thursday.

“OMB [Office of Management and Budget] told GAO that it withheld the funds to ensure that they were not spent ‘in a manner that could conflict with the President’s foreign policy,’” Armstrong said.

“The law does not permit OMB to withhold funds for policy reasons,” he added, and said the Impoundment Control Act of 1974 grants the president “narrow, limited authority to withhold appropriations.”

The White House Office of Management and Budget ordered the withholding of funds to Ukraine in summer 2019 amid President Donald Trump’s attempt to convince the Eastern European country to open an investigation into Hunter Biden, the son of former Vice President Joe Biden, and the gas company he worked for, Burisma.

The GAO is an independent watchdog agency that works for Congress.

OMB spokeswoman Rachel Semmel rejected the legal opinion in a statement to The New York Times.

“We disagree with GAO’s opinion,” Semmel said. “OMB uses its apportionment authority to ensure taxpayer dollars are properly spent consistent with the President’s priorities and with the law.”

However, the GAO report stated that OMB and the State Department have failed to provide information surrounding the withholding of funds.

“We will continue to pursue this matter and will provide our decision to the Congress after we have received the necessary information,” the report states. “We consider a reluctance to provide a fulsome response to have constitutional significance.”

The GAO’s legal opinion comes as the Senate is preparing to hold a trial on whether to remove Trump from office. House impeachment managers formally delivered two articles of impeachment to the Senate on Wednesday.

“The GAO opinion is forceful and it is unambiguous: When President Trump froze congressionally appropriated military aid to Ukraine, he did so in violation of the law and the Constitution,” Sen. Patrick Leahy, D-Vt., said in a written statement.

“It is the responsibility of the Senate to defend our Constitution’s carefully balanced separation of powers and, in doing so, judge whether President Trump abused his office for personal gain when he withheld Congressionally-appropriated funds from an ally in violation of the Impoundment Control Act,” Leahy said.

As Vice Chairman of the Appropriations Committee, I have some thoughts on the GAO’s powerful decision this morning, just BREAKING NOW: pic.twitter.com/PNgPJ7spJJ

Sen. Chris Van Hollen, D-Md., said Thursday that the GAO’s “bombshell” opinion shows that the Trump administration “illegally withheld assistance from Ukraine and the public evidence shows that the president himself ordered this illegal act.”