Here’s Why the Killing of Suleimani Was Legal 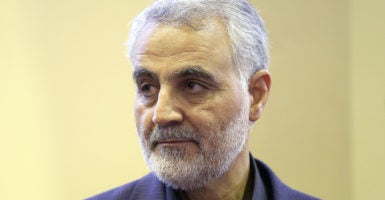 Since the U.S. killed Iranian Maj. Gen. Qassim Suleimani in a drone strike on Jan. 2, talk has turned to whether the strike was legal if the general could not be proven to have posed an imminent threat.

But, as I said on Jan. 6 on Fox News and for the reasons explained below, the strike was legal, and that legality did not depend on an imminent attack about to be launched.

It’s an important question, and administration officials, as well as scholars and lawmakers from both sides of the aisle—see here, here, and here—have been talking as if it were a legal requirement that the general pose an imminent threat. But, based on the publicly available evidence, it wasn’t required under these circumstances.

As an aside, it seems that providing timely explanations for the legal basis for the killing of international terrorists has proven difficult for both Republican and Democratic administrations.

When Navy SEALS killed Osama bin Laden in 2011, the Obama administration did a terrible job explaining the underlying legal basis for the raid, which we tend to forget.

As I wrote about here, the Obama administration’s “pitiful and virtually non-existent legal defense of the mission is inexcusable and has given activists the opportunity to argue that the mission was unlawful.”

But the Obama administration was on solid legal ground when it killed bin Laden, as I wrote here. Officials eventually got their messaging right that the operation was perfectly legal, but not until after the armchair legal cognoscenti and international know-it-alls had piled on.

Today, commentators are piling on the Trump administration, claiming, among other things, that it failed to provide sufficient evidence that a future attack by Suleimani was imminent, or that the strike violated international law.

Administration officials only made it more difficult when they briefed Congress last week on the operation by providing conclusory evidence of what imminent attacks might take place.

Evidence of future attacks was no doubt based on highly sensitive sources and methods, which, if exposed, would cut off a critical pipeline of invaluable intelligence inside Iran.

And since the administration was not willing to get into the details of how it knew future attacks were imminent, it gave some members of Congress the opportunity to call into question the value or weight of the evidence with respect to imminent threats, and gave some the politically convenient fig leaf to be able to say Suleimani was a bad guy, but, the administration failed to prove the threats were looming and immediate.

But as Attorney General William Barr said recently, the issue of imminence here is a “red herring.”

Craft’s letter cites previous armed attacks by Suleimani and his thugs, which include:

As the leader of the groups that launched these attacks during an ongoing armed conflict, Suleimani made himself a lawful military target against whom the United States could exercise its inherent right of self-defense.

It would be different if Suleimani had never directed any military attacks against the United States or if the United States were not in an ongoing armed conflict against al-Qaeda, the Taliban, ISIS, and associated forces.

But we are. And Suleimani knew that and willingly joined the fight, just like other fighters from countries other than Iraq and Afghanistan. In doing so, he made himself a lawful military target.

But Suleimani’s actions go well beyond those listed in Craft’s letter. As the head of the ruthless Islamic Revolutionary Guard Corps, Suleimani directed, schemed, planned, and led attacks against the United States and its allies’ interests outside and inside the United States for decades.

>>> How US Strike Against Iranian General Changes Rules of Game in Iraq, Region

He traveled throughout the Middle East, in direct violation of a U.N. Security Council Resolution that specifically forbade him from travelling outside of Iran, and did so, no doubt, to brazenly continue his ongoing war against “the Great Satan” and our allies.

It simply defies common sense that the United States could not target him—lawfully, as a matter of self-defense—for his decades-long, ongoing military campaign against U.S. military and civilian personnel.

Beyond those listed in Craft’s letter, there are dozens of articles going back years that demonstrate that Iran—in particular, the Iranian Revolutionary Guard Corps, which Suleimani led—was directly or indirectly responsible for military actions against the U.S. military and other interests. They too make the case for using military force in self-defense, as one cannot willfully ignore Suleimani’s past actions.

Iran sought to expand its influence over Iraq long before the 2003 war in Iraq, as Heritage Foundation senior fellow and Iran expert Jim Phillips wrote in 2007. After the 1979 Islamic Revolution, Iran’s new regime sought to subvert Iraq’s Sunni-dominated regime by radicalizing Iraq’s Shia majority, which (in 2007) was more than 60% of the Iraqi population.

The Defense Department’s most recent numbers indicate that the force Suleimani commanded was responsible for the deaths of at least 603 American soldiers in Iraq and Afghanistan.

The Revolutionary Guards also were responsible for the 1996 bombing of the Khobar Towers housing complex in Saudi Arabia, which killed 19 service members, and the 1983 bombing of the U.S. Marine barracks in Beirut, which killed 241 U.S. soldiers—although these attacks took place before Suleimani was in charge.

The list goes on, but there is no doubt the U.S. government has additional facts and intelligence that connect Suleimani and the forces and proxies he directed to deaths and attacks against the United States and our allies, both here and abroad.

And although we can’t predict what Suleimani had planned for his next terror campaign, the law does not require we do so to exercise our right of self-defense.

Suleimani was responsible for a decades-long series of military attacks against U.S. interests, which resulted in the deaths of at least 603 U.S. military personnel. There was no evidence he had withdrawn from his combatant activity and every indication that, if not stopped, his actions would be ongoing.

The United States had the legal right to exercise its inherent right of self-defense against him.

>>> Strike on Suleimani Creates Political Stir in Middle East and US

According to one legal expert in this area, professor Robert Chesney, “imminence is a critical … concept that comes up in debates over self-defense. But it is not a necessary part of the analysis in all cases.”

He describes that scenario as “responsive self-defense,” which he notes is how the Craft letter to the U.N. framed the strike—“in response to an escalating series of armed attacks in recent months.”

Chesney argues, as I did above, that the possibility of future attacks “remains relevant in the responsive self-defense scenario.”

There is a substantive difference between responsive self-defense and anticipatory self-defense. The former does not require evidence of imminence; the latter does.

The United States was on solid legal grounds to act in self-defense and take out Suleimani. We had no legal obligation, under the circumstances, to demonstrate that future attacks were imminent.