An Appeals Court Rules Against Obamacare. Here’s What Lawmakers Should Do Next. 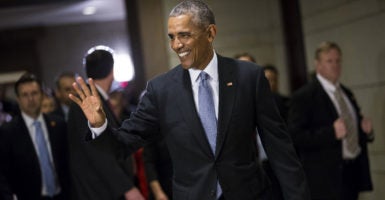 As the Obamacare case winds its way through the legal system, it’s imperative that policymakers pursue real health care reform. Pictured: President Barack Obama leaves a Jan. 4, 2017, meeting with Democratic lawmakers on how to protect the Affordable Care Act from Republicans in the House, Senate, and White House. (Photo: Samuel Corum/Anadolu Agency/Getty Images)

A divided panel of judges of the U.S. Court of Appeals for the 5th Circuit on Wednesday declared part of Obamacare unconstitutional—but the case is far from over.

The court sent the case back to a federal district court in Texas to decide whether that means the rest of the law should be thrown out as well.

The panel ruled 2-1 in favor of 20 states, led by Texas, that had filed a lawsuit seeking to strike down the Affordable Care Act, popularly known as Obamacare.

As the case continues to wind its way through the legal system, however, it’s imperative that policymakers pursue real health care reform.

The appeals court’s decision reminds us that Obamacare is deeply flawed. It isn’t working for far too many American families and individuals slammed with high premiums and few choices.

Rather than looking for ways to keep Obamacare in place amid these legal challenges, lawmakers should pursue real solutions.

In 2012, in NFIB v. Sebelius, the Supreme Court upheld the constitutionality of Obamacare’s individual mandate—which requires all Americans to have health insurance—by the narrowest of margins.

Chief Justice John Roberts, providing the deciding vote, devised a novel theory construing the penalty associated with violating the individual mandate as a tax that Congress has the power to levy under the Constitution.

As part of the Tax Cuts and Jobs Act, signed into law by President Donald Trump in December 2017, however, Congress repealed the financial penalty associated with failing to comply with the individual mandate, effective in 2019.

Texas argues that once the penalty was reduced to zero dollars, it no longer could be deemed a tax and that, therefore, the individual mandate no longer has a constitutional leg to stand on.

Texas further argues that the Supreme Court, in upholding the individual mandate, relied on the proposition that Congress considered the individual mandate to be a central—indeed, indispensable—component of Obamacare that is not “severable” from the rest of its provisions, and that without it, the remainder of the law should be invalidated.

A rival group of 17 states, led by California, are defending the law, arguing that even a tax of zero dollars is still a tax, and that it was never Congress’ intent to get rid of the rest of Obamacare when it repealed the financial penalty associated with the individual mandate as part of the Tax Cuts and Jobs Act.

The court panel’s majority agreed with Texas and held that the Affordable Care Act is unconstitutional.

What Should Occur Next

Set the legal fight aside. We need a better health care solution than Obamacare.

In the near term, this court decision does nothing to change our health care system. Nothing changes for people enrolled in Obamacare as this case continues to wind its way through the legal system.

But this legal fight reminds us that the law has been on shaky ground since its creation—and underscores that we need a better health care solution for the millions of Americans affected by the program.

Obamacare has led to years of increasing costs and decreasing choices. Premiums doubled in the first four years of the program. Millions lost the coverage they used to have. Americans found it harder to pick the right plan and doctor, as health plan choices declined and provider networks narrowed.

Frustrated providers are drowning in red tape and increasingly feeling burned out. Meanwhile, taxpayers are on the hook for the money needed to paper over Obamacare’s flawed structure.

Those who seem to benefit most from Obamacare are big insurance companies that embraced the law and receive a steady stream of taxpayer subsidies, and politicians who made endless promises to reform Obamacare but failed to deliver.

Regardless of those facts, expect many in Congress to call for immediate restoration of Obamacare in the name of protecting the sick and those with preexisting conditions.

Some on the left claim Congress must protect Obamacare because only Obamacare allows Americans with preexisting conditions to get coverage. Others claim that the only solution is to double down on Obamacare’s failures, outlaw private coverage, and put us all on a new government-run plan (the so-called “Medicare for All” solution).

That’s an irresponsible, false dilemma, and Congress should reject it.

There are steps that states can take right now to ensure people with preexisting conditions are protected, even if Obamacare ultimately goes away.

Congress should let states review their health care regulations and pursue innovative ways to make coverage more affordable and accessible to Americans—regardless of their income or medical status.

Most state legislatures are about to go into session in early 2020, so this is both a desirable and possible approach.

Congress does have a role to play in helping families and individuals get the quality private coverage they want and helping health care professionals meet patients’ needs.

Conservatives have a proposal to achieve that; namely, the Health Care Choices Proposal, which undoes Obamacare’s damage by letting free markets deliver solutions people want and by focusing safety-net protections on the people who need them most.

Under Obamacare, the federal government took over much of the private market—imposing regulations once handled by states and giving insurance companies taxpayer subsidies that rise dollar for dollar as they raise prices. The Health Care Choices Proposal does away with that flawed scheme.

Instead, it would convert existing Obamacare spending into a grant that states would use to ensure chronically ill patients have access to the health coverage of their choice.

Greater flexibility and resources to the states mean that all Americans, even those who are chronically sick, would have access to more health plans at better prices.

The Health Care Choices Proposal would lower premiums up to an estimated 32% and ensure that everyone can access a quality private coverage arrangement of his or her choice.

And everyone who gets a subsidy could decide what coverage to use it for, including private or employer-sponsored health insurance.

Individuals and families would be able to decide what coverage arrangement works for them and decide whether to work directly with a doctor for primary care and buy catastrophic coverage, or get a plan that covers more costs upfront.

For most people, this is a much better option than what happens today; namely, being pushed onto a government-controlled plan that a bureaucrat thinks is best for them.

The proposal would build on a promising, emerging trend already happening in the states, thanks to regulatory relief provided by the Trump administration. When states have been given even a little bit of freedom from Obamacare’s mandates, they’ve been able to lower premiums using tools that ensure that the sick still retain access to care.

Politicians have long promised to replace Obamacare with solutions that help everyone. It’s time to deliver—no matter how this case ends up.