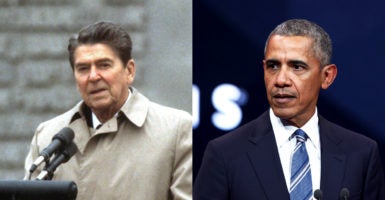 On the left, President Ronald Reagan gives a speech in Bergen-Belsen on May 5, 1985. (Photo: picture-alliance / dpa/Newscom) On the right, President Barack Obama is pictured giving a speech at the Radio France auditorium during the biannual "Napoleons" summit in Paris on Saturday, Dec. 2, 2017. (Photo: Photopqr/Le Parisien/Maxppp)

The results of the poll, which was conducted from June 5 to 12 among a population of 2,002 adults, suggest that the best president in a person’s lifetime is dependent on their age.

Older voters in Generation X, who are 38 to 53 years old; boomers, who are 54 to 72 years old; and silent generation voters, who are 73 to 90 years old; all chose Reagan as their favorite president. He was in office before millennials were born, explaining why only 13 percent of the younger generation between the ages of 22-37 chose him as a favorite of their lifetime.

Former President John F. Kennedy was another popular pick for boomers and silent generation, who were both alive during his presidency and each voted 16 percent and 17 percent, respectively, for him as their favorite.

Even though President Donald Trump has only been in office for less than half of his term, 19 percent of voters said he has done the best or second best job of any president of their lifetimes, similar to Obama, who had 20 percent of votes in 2011.