The Fight for Semiconductor Leadership in Asia 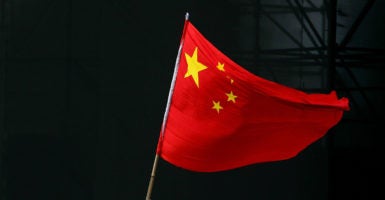 Beijing has set an ambitious goal for China to domestically produce 40% of the country’s demand for semiconductors by next year and 70% by 2025, up from less than 20% now. Pictured: A national flag is waved during a festival to mark Chinese National Day Oct. 2, 2005, in Beijing. (Photo: Guang Niu/Getty Images)

Junsoo Kweon is the Asan Fellow in the Asian Studies Center at The Heritage Foundation.

Beijing wants to become the global leader in a variety of advanced technologies. To get there, government entities have been investing more than $100 billion in China’s domestic semiconductor industry.

Beijing has set an ambitious goal for China to domestically produce 40% of the country’s demand for semiconductors by next year and 70% by 2025, up from less than 20% now.

Governments around the world are worried about the lengths to which the Chinese government is willing to go to achieve technology leadership. There are concerns as to what the path to achieving global leadership could mean as countries become more reliant on high technology and the semiconductors they employ.

For those who don’t know, semiconductors are essential parts of what make up the smartphones, computers, and automobiles we use in our daily lives. Those little chips store, analyze, and process data.

Emerging technologies like artificial intelligence and the next generation of telecommunications—5G—will also be highly dependent on the accessibility and capability of semiconductors.

Semiconductors are ever more advanced, but they are not a new technology.

The leading semiconductor-producing suppliers in the world are privately owned companies. Annually, American companies such as Intel and Qualcomm invest just over $13 billion and $3 billion, respectively, in semiconductor research and development. South Korea’s Samsung invests more than $3 billion, while Japan’s Toshiba and Taiwan’s TSMC invest more than $2 billion each.

Meanwhile, Beijing has given significant support toward China’s semiconductor development. It recently announced a new state-sponsored fund of $29 billion for the development of its indigenous semiconductor industry.

But it’s hard to say whether the more than $100 billion worth of subsidies will really be enough to enable China to meet its growing domestic demand. China’s high demand for semiconductors means it’s still heavily reliant on imports, as over 80% of its demand is currently met through foreign producers.

Given the global supply chain, instead of building a self-sufficient semiconductor market, the Chinese government should allow for more competition in its semiconductor markets to allow American, South Korean, Japanese, and Taiwanese producers to meet China’s growing demand. And the private sectors of all concerned should be allowed by their governments to sell them—with very narrow, technically defined exceptions for national security reasons.

Otherwise, a policy of semiconductor independence may only add to China’s other economic and technology woes. It certainly won’t make China’s economic relationship with the U.S., South Korea, Taiwan, and Japan any easier.

In the past, the semiconductor-producing economies in the world used to specialize in either fab or fabless production. However, many companies in Asia now do both and often integrate the processes.

Last year, South Korea and China were the No. 1 and No. 2 global investors in fab equipment to manufacture semiconductors, followed by Taiwan, Japan, and the United States.

“In the past 20 years, regional production capacity has shifted from the United States and Japan, the traditional production leaders, towards (non-Japan) Asia-Pacific countries (Taiwan, South Korea, and China),” a report by the International Trade Commission notes.

To stay ahead of the curve on fabless production, the government of South Korea, in partnership with Samsung, is working with leading universities to cultivate scientists and engineers by creating curriculums dedicated to semiconductor research and design.

Samsung has, in fact, been playing a larger role in developing smaller and faster chips, although Intel recently took the lead for semiconductor sales in 2019. No one knows for sure which will dominate the fabless market in sales next year.

What’s important, though, is that these private companies are allowed to compete—unlike within China’s domestic semiconductor market—for semiconductor leadership. Their efforts to develop better products at lower costs is a benefit to all tech industries.

The competition in the semiconductor industry is becoming more intense than ever. The amount of investments in Asia is unprecedented. The way to make the most of it is to allow businesses—whether in the U.S., China, or elsewhere in Asia—to structure their production as they see fit, and compete.